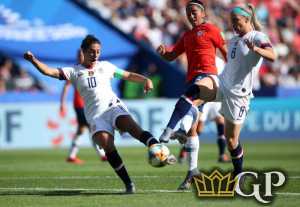 The United States can’t wait to get back on the pitch. There has been a lot of hand wringing and second guessing in the media after the USWNT destroyed Thailand 13-0 and kept celebrating...

The United States can’t wait to get back on the pitch. There has been a lot of hand wringing and second guessing in the media after the USWNT destroyed Thailand 13-0 and kept celebrating goals long after the outcome was well in hand over the past few days. That has somewhat drowned out their historic accomplishment, but they can put that all behind them when they face Chile on Sunday. They are heavy favorites to beat Chile, yet it’s very unlikely we see a scoreline even close to half of what we saw on Tuesday as La Roja are much more sturdy in defense.

Chile are making their first-ever appearance at the Women’s World Cup. They knew the odds of making it out of the group stage were tough, but they nearly secured what would have been a crucial point in their first match.

La Roja were sizable underdogs against Sweden. Scoring on the Swedes would be tough, so they relied on their strength in defense and almost picked up a draw. Although Sweden dominated time of possession and had much better chances, the game was 0-0 until the Swedes finally broke through in the 83rd minute. That deflated the Chileans, and they eventually allowed another goal in extra time in a 2-0 loss.

There was never a chance of the USWNT losing to Thailand. You could see the size mismatch the second the game started, and the Americans played to their advantage from the beginning. The USWNT netted three goals in the first half and the rout was on at that point, but everyone was surprised to see where it ended.

The USWNT scored four goals in a span of six minutes shortly after halftime to make it 7-0, and they didn’t let up en route to the biggest blowout in the history of the World Cup. When the final whistle blew it was 13-0, and the Americans had sent a message to the rest of the field.

Christiane Endler will be very busy on Sunday. Endler is one of the top goalkeepers in the world, and she is the star of Chile. She is the captain of the team and most capped player in their history, so the team leans heavily on her. Endler was recently named the top goalkeeper in France last season, and she has shined since joining Paris Saint-Germain. This will be her toughest test yet for the national team.

Alex Morgan netted five goals in the Stars and Stripes’ romp of Thailand, and she will look to add to her lead in the race for the Golden Boot. Morgan was ever-present on the field, and Thailand’s defense couldn’t focus on her without getting picked apart by one of her teammates. The strength of America’s attacking depth has really helped her out, and Morgan is likely to net at least a goal here.

Chile are much better in the back than Thailand, so there won’t be any double-digit shenanigans this time around. The outcome will never be in doubt though. La Roja won’t get anything going on the attack, and the USWNT will control this game from the outset. However, I don’t think they will cover the goal line for two reasons. I don’t believe they will want to recreate the media firestorm that has surrounded them for the last few days, and I don’t believe Chile will let five goals through. Endler is too good, so I’ll back Chile to cover.