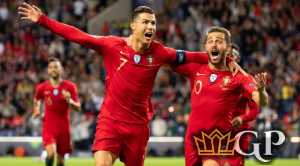 The very first winner of the UEFA Nations League Final will be determined on Sunday. At the start of the competition, Portugal and the Netherlands each had odds in the middle of the pack to win the tournament, but they have both made...

The very first winner of the UEFA Nations League Final will be determined on Sunday. At the start of the competition, Portugal and the Netherlands each had odds in the middle of the pack to win the tournament, but they have both made the most of their chances. Each country will now have a chance to win their second major international tournament, and Portugal are slight favorites as the hosts of this competition.

When these teams met at the World Cup in Germany 13 years ago, their match went down in infamy. In what became known as the Battle of Nuremberg, Portugal and the Netherlands played the most card-filled match in the history of a major FIFA-sanctioned tournament. When it was all said and done, the teams were playing nine on nine as each side had seen two red cards and a total of 16 yellow cards were given out too.

The Netherlands have looked great over the last year. Failing to qualify for the 2018 World Cup after earning a spot on the podium in 2010 and 2014 was crushing, but they used that disappointment as motivation. No one gave the Dutch much of a chance to top France and Germany in the group stage of the UEFA Nations League, but they did just that, and the Netherlands made it to the final after beating England 3-1 in extra time on Thursday night. In that match, the Dutch fired 29 shots and put 14 shots on net, constantly probing England until they broke.

Portugal are hoping to win their second major title in three years, and they would be the Kings of Europe if they were to emerge victorious on Sunday. The Navigators won the 2016 European Championship, so they would be the reigning champion in both of Europe’s major regional tournaments. To get to the final, Portugal finished ahead of Poland and Italy, but they were fortunate to get past Switzerland on Wednesday. The Swiss controlled the flow of the game and had much better chances, but they continually flubbed them. That kept the door opened for Portugal who eventually kicked the door in late to win 3-1.

Matthijs de Ligt is one of the most sought after players this summer. The 19-year-old Ajax center back is the piece that many of Europe’s biggest clubs are coveting, and he was involved in both regulation goals on Thursday. His poor touch deep in his own end set up Marcus Rashford for a great chance inside the penalty area, and he brought down Rashford to give him a PK. Rashford converted, but de Ligt didn’t end up being the goat. He showed why he is such a danger on set pieces by heading home a corner after a beautiful run to tie the match 1-1.

Cristiano Ronaldo continues to shine for club and country. Ronaldo didn’t take part in the group stage of this competition, but he made his mark in the semifinal. He netted his 53rd career hat trick against the Swiss, sealing Portugal’s win with smooth goals in the 88th and 90th minute. Ronaldo scores an average of 0.56 goals per game with the national team, one of the highest averages in the world.

Although the Portuguese have home field advantage in the final, their problems in the back line will come back to bite them against the Netherlands. Portugal looked rough in defense against Switzerland, and they could be even more shaky as Pepe will miss the final due to a fractured shoulder blade. The Oranje will take advantage where the Swiss couldn’t, and the Dutch will win the first UEFA Nations League.