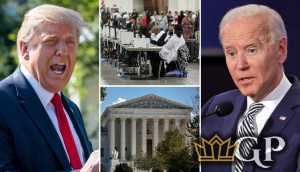 If you think that the 2020 U.S. Presidential election is going to be decided anytime soon, you may want to think again. Will the election end up being decided in the Supreme Court? Let’s look at the question and some of the latest U.S. Election odds.

If you think that the 2020 U.S. Presidential election is going to be decided anytime soon, you may want to think again. The current situation has Joe Biden leading President Donald Trump, but there are some states that have not been decided and a number of other states where voting fraud may have occurred. Will the 2020 U.S. Election end up being decided in the Supreme Court?  Let’s look at the question and some of the latest U.S. Election odds.

Will Donald Trump be the Next President Elected?

I want to say that these odds were taken on Thursday morning and the odds are moving on a regular basis. If Arizona and Pennsylvania break for Trump you could easily see these odds reversed.

I don’t know where oddsmakers are coming up with this line. Trump leads the state with just 1% of the vote left to be counted. He leads by about 22,000 votes with about 60,000 votes left to be counted. For Biden to win he would have to get two thirds of the remaining votes and withstand a legal challenge in the courts. That seems highly unlikely and yet the oddsmakers have the Democrats favored. I think the +110 on the Republicans is a good bet in Georgia.

This is another crazy line, as the Republicans could very well win this state. If the 2020 U.S. Presidential Election goes to the Supreme Court this is the state where everything could be decided. There are already allegations of fraud in the state and a number of lawsuits have been filed. Taking a shot with the Republicans at +340 is definitely worth a shot.

The U.S. Supreme Court is the final court of appeal in the United States and it is where the 2020 U.S. Presidential election could be decided. But let’s not get ahead of ourselves. For cases to make it to the Supreme Court they first have to be heard in lower courts. There are a number of issues in quite a few states with allegations of fraud, voting extension issues, etc. It should be noted that in 2000 the U.S. Presidential election did go to the Supreme Court and it was George W. Bush defeating Al Gore.

The issue for the courts to decide is whether the states had the legal authority to change voting procedures. Normally it is the state legislatures that change the law in a state, but because of the COVID-19 pandemic, governors in some states bypassed the legislature and changed laws on their own. Lawyers can challenge the way the election was run and get votes thrown out. If Trump loses Pennsylvania it is almost a given that there will be a legal challenge if Trump can still win the election.

The bottom line is that the Supreme Court only gets involved when there are enough potential votes to impact the election. “The US Supreme Court only gets involved if there’s a genuine basis for litigating over enough ballots that could make a difference,” said Edward Foley, a professor at The Ohio State University Moritz College of Law to the media.

That happened in 2000 and it could happen again in 2020. The Supreme Court currently has a 6-3 majority in favor of the Republicans. What we do know is that 2020 has been a year unlike any in history. The United States has dealt with a pandemic, riots and now it will probably have to deal with a contested U.S. Presidential election.  Look for the states of Michigan, Wisconsin, Pennsylvania, Nevada and possibly the states of Georgia and Nevada to be contested in the courts.

Check out the 2020 U.S. Presidential odds at top online sportsbooks.