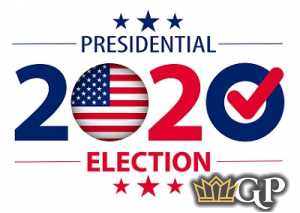 Will we know the winner of the 2020 Presidential Election on November 3rd?  President Donald Trump and challenger Joe Biden have said that we may not know the winner of the election for days or even weeks after the election is over. In the year of the pandemic there will be more mail-in voting than at anytime in history and there are concerns about the legitimacy of mail-in voting. Let’s look at the latest 2020 U.S. Presidential odds and the likelihood that we won’t know the winner until sometime after November 3rd.

In the last week we have seen very little line movement on the 2020 U.S. Presidential election. The last week has seen a lot of unexpected events, including the death of a U.S. Supreme Court justice. The United States senate is expected to confirm a new justice before the election so that the court will have the normal nine justices in place. The 2020 U.S. Presidential election could end up being decided by the Supreme Court and a full court with nine justices will be important. “I think this will end up in the Supreme Court,” Trump said to the media, “And I think it's very important that we have nine justices.”

The U.S. Presidential election is normally determined on Election Night, but in 2020 that may not happen because of all of the mail-in ballots. Millions of ballots may not be counted until after November 3rd. There are huge concerns about voter fraud and Democrats and Republicans have doubts about whether or not mail-in ballots can be counted before November 3rd.

Trump has gone on record saying that mail-in ballots are a huge problem. “Get rid of the ballots and you’ll have a very peaceful — there won't be a transfer, frankly. There will be a continuation,” Trump said to the media bout mail-in ballots. “The ballots are out of control. You know it, and you know who knows it better than anyone else? The Democrats know it better than anyone else.”

On a normal election night, the first polls to close are on the East Coast at about 7 p.m. Eastern Time. The votes for those states are counted and networks project the winner of each state. The polls close throughout the country from the East to the West and results from each state come in throughout the night.  Four years ago when Trump won the election, the overall result was called at about 2:30 a.m. Eastern Time on November 4th.

The 2020 U.S. Presidential election will be unlike any other and more mail-in votes will be cast than ever before.  There are estimates that more than 80 million ballots will be cast by mail, more than double the amount cast four years ago and the most in history. Will all of the ballots be counted before Election Day? The answer is no. Will those ballots be enough to tilt the election one way or the other? We don’t know the answer to that yet, but we do know that the Democrats and the Republicans are planning legal challenges to mail-in votes. Some states like California allow mail-in votes if they are postmarked by Election Day. Other states, like Pennsylvania, will only count votes that are received by Election Day.

The problem with mail-in ballots is that many states do not start counting them until Election Day and oftentimes, after the in-person votes are tabulated. If there is a huge increase in mail-in ballots, it could take many days to come up with an official total for some states. We already know that some states are going to have trouble counting ballots because they had trouble with mail-in voting in primary elections.

What does all of this mean in terms of the 2020 U.S. Presidential election? It means that there is a very good chance that we will not know the winner of the election until after November 3rd.