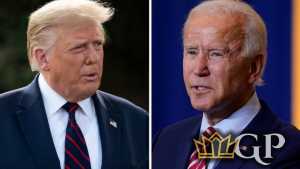 The 2020 U.S. Presidential election is just over a month away with Joe Biden a slight favorite against incumbent President Donald Trump. The odds have moved slightly toward Biden in the last week, but will the odds be impacted by the upcoming debates and news surrounding Trump’s tax returns? There are so many news stories that come out all the time, but so many are lies that it is hard to keep track. Let’s look at the latest 2020 U.S. Presidential odds and glance at the debates and the news about Trump’s tax returns.

The reality is that Biden doesn’t need to do much in the debates for the media to declare him a winner. Expectations on Biden are extremely low, so if he stands up straight, doesn’t slur his words and doesn’t get lost, that will probably be enough for the extremely left leaning media to give Biden the edge. No matter how well Trump does, the vast majority of the media will give him no credit.

It is worth remembering that four years ago when Trump debated Hillary Clinton that only 10% of voters had their views impacted by the debates. Almost 70% of voters have already made up their mind in terms of who they will vote for. Unless Biden completely bombs in the debates, which is possible, there is little likelihood that the debates will impact 2020 U.S. Presidential odds.

The New York Times put out a story on President Trump’s tax returns and they say that Trump has decades of tax avoidance and that his businesses have lost millions of dollars. It should be noted that many people now consider the New York Times a newspaper that no longer prints news but prints opinions. We don’t even know that what the Times has printed is true. What we do know is that tax returns can only be released by the IRS and Trump’s are not public so the question should be how the New York Times got Trump’s returns.  Unfortunately, in today’s world we won’t have many in the media asking that question.

The question in regards to Trump’s tax returns is whether any of it will matter to voters. People who are going to vote for Trump are not going to give a second thought to a New York Times story, as that paper has a reputation for “fake news.” Voters also recognize that Trump is an astute businessman who takes advantage of all the legal loopholes in the IRS tax code.

It should be noted that the New York Times has been down this road before. They published a story in 2019 that showed that Trump lost about $1.2 billion between 1985 and 1994, but voters didn’t bat an eye. Voters already know that Trump is a good businessman and tax returns are not going to change their mind. Trump led the United States to the best economy in history and most voters still trust him over Biden to lead the U.S. going forward in terms of the economy. Recent polls show that Trump still does well among voters with the economy. We don’t know if tax returns will make any impact in terms of the 2020 U.S. Presidential election but based on past history, it seems unlikely.