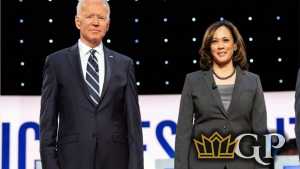 Democratic Presidential candidate Joe Biden finally selected his Vice Presidential running mate and went with California senator Kamala Harris. The selection of Harris did very little to enhance the chances of Biden becoming President and many people believe he did himself more harm than good. One thing that is very well known when it comes to a Presidential candidate selecting a Vice Presidential running mate is that you “do no harm.” The selection of Harris violated that rule, as there is nothing about Harris that will help Biden, but there is a lot about her that could hurt him. The 2020 U.S. Presidential Election odds barely moved on the announcement of Harris being Biden’s choice. Some sportsbooks moved toward Biden but most sportsbooks moved the odds toward Trump or didn’t move them at all. Let’s look at the latest 2020 U.S. Presidential odds and examine just how much Harris could hurt Biden.

I don’t know how much a Vice Presidential nominee really matters when it comes to voters selecting a President, but there is no question that Kamala Harris is not likable. She wasn’t even liked by her own Democratic Party in race for the Presidential nomination. Not only is she unlikable, she is unqualified. She has no foreign policy experience and no experience in terms of economics. She was the attorney general in California and a DA in San Francisco. Anyone who looks at her record as the AG or DA will find that Harris did a horrible job.  And no, that is not an overstatement.

When you select a Vice Presidential nominee then you need to select someone who brings something to the table. Harris was selected because of her gender and race and nothing else. She won’t help Biden at all in terms of her knowledge and qualifications and she won’t help him in terms of the Electoral College because Biden was going to win California anyway. Harris is not going to appeal to any voters that were undecided because her record on taxes, crime, immigration, energy, etc. is terrible. She was destroyed in the Democratic Presidential debate by Tulsi Gabbard who pointed out the disgraceful performance by Harris as AG and DA.

President Trump said that Harris wants to do some things that are very unpopular. “She is a person that’s told many, many stories that weren’t true. She’s very big into raising taxes, she wants to slash funds for our military, at a level that nobody can even believe,” Trump said to the media, “She’s against petroleum products. I mean, how do you do that and go into Pennsylvania, or Ohio, or Oklahoma, the great state of Texas.”

Harris is a Fighter

The one strength that Harris does possess is the ability to fight. She will not back down from anything and she will attack anyone and everything. She can’t defend her record and she doesn’t have any real qualifications to be Vice President, but she can tell lies with the best of them and she is the ultimate politician. She will do exactly what the Democratic leadership wants her to do. President Trump called Harris “extraordinarily nasty.”

The 2020 U.S. Presidential election should come down to who the American people trust to lead them forward. There is nothing about Joe Biden or Kamala Harris that inspires people. The only reason that anyone would vote for them is to vote against President Donald Trump. Can a candidate win simply by giving voters an option to vote against someone else?  Are the American people brainwashed enough to actually vote for Biden? If you look around the United States you will see Democratic states and cities that are in ruin, but most of the media is ignoring the riots and looting in Democratic states and cities.

2020 U.S. Presidential odds really didn’t move on the selection of Harris and in the end, the race will come down to Biden vs. Trump and whether or not the United States has truly fallen into a liberal abyss. Four years ago the people in the United States nearly made Hillary Clinton the President, but there were enough people who didn’t want to ruin the country to elect Trump as President. And that is really what the 2020 U.S. Presidential election is all about. Do voters want to turn the United States into a socialist country or do they still believe in hard work, values and the American dream?  We’ll find out in less than three months.