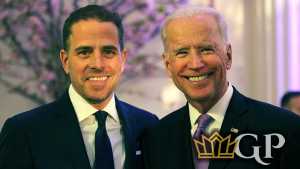 2020 U.S. Presidential odds have moved toward President Donald Trump after news has come out about Joe Biden and his son Hunter Biden. The odds just a week ago had Biden as more than a 2-1 favorite, but now some top online sportsbooks have moved the odds by 30 cents or more in favor of Trump.  The question now is how the Biden scandal will affect the odds over the next week and whether or not much of the mainstream media will even cover the story. Let’s look at 2020 U.S. Presidential odds and the Biden scandal.

Which Party Will Win the Popular Vote in the 2020 Presidential Election?

If you listen to much of the mainstream media you might think that the Hunter Biden laptop story is just another misinformation story that is false. The reality is far different, as the story has proven to be true and there are now serious concerns that Joe Biden made deals with China and other countries to help his son and that the Biden family profited from the deals. This news about Hunter Biden should really not come as a surprise to anyone because the New Yorker last year published a story about Hunter Biden and his risk to his father’s campaign. And the U.S. government has known about Hunter Biden and his positions in Ukraine that “looked terrible.”

The New York Post has published emails from a laptop that is claimed to be Hunter Biden’s laptop. Every indication is that the laptop was indeed Biden’s and there are thousands of emails on the laptop, many of which talk about Hunter Biden’s deals. No one from the Biden camp has disputed that the laptop was Biden’s or that any of the emails are untrue. FOX News on Thursday published information from Tony Bobulinski, who was listed as a recipient of an email, confirming the email authenticity. One of the emails talks about an equity split with “20” for “H” and “10 held by H for the big guy?” Bobulinski said to Fox News that “the big guy” is in fact Joe Biden. Bobulinski said he is CEO of a company that “was a partnership between the Chinese operating through CEFC/Chairman Ye and the Biden family."

What puts Biden in a bind is that he was asked specifically whether or not he had talked with Hunter about Hunter’s business and Biden said no. Bobulinski said that Biden is not telling the truth. "I’ve seen Vice President Biden saying he never talked to Hunter about his business. I’ve seen firsthand that that’s not true, because it wasn’t just Hunter’s business, they said they were putting the Biden family name and its legacy on the line," Bobulinski said to Fox News.

Can Biden Hide for Another Week?

The question that has to be answered is whether or not Biden can hide for another week. Biden has rarely been seen on the campaign trail and this week he was in hiding for more than three days. It is simply unheard of for a candidate to stay out of the spotlight for days at a time. The Biden campaign has decided that keeping Biden out of the spotlight will keep him from answering questions and keep him from making stupid comments. If you believe the polls, many of which have been proven to be unreliable, Biden’s strategy has worked. The less that people see of Biden, the less he has to talk and the more the media can focus on Trump.

The interesting part of the 2020 Election is the odds. Have oddsmakers and top online sportsbooks been fooled yet again? Four years ago, the oddsmakers and top online sportsbooks simply followed the public and the polls, and they had Hillary Clinton as a solid favorite. The polls and the media were proven wrong and Trump won by a decent margin. Could the same thing happen again in 2020? Perhaps oddsmakers are starting to see the light, as the latest odds have moved toward President Trump and based on the current Biden scandal, those odds could move more in the next week.