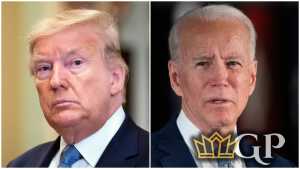 Will Joe Biden be the Next President Elected?

Will Donald Trump be the Next President Elected?

It was just a few weeks ago that the 2020 U.S. Presidential odds were basically a pick. The odds moved slightly toward Biden after the first Presidential debate and they moved toward Biden again after Trump got COVID-19. It is somewhat surprising that the odds and the polls have moved toward Biden because Trump has recovered quickly from the virus. Most people would view that as a positive, but the media has painted it as troublesome because Trump has downplayed the virus. Most people in the United States want to get back to normal and the reality is that the virus is not that dangerous. When 95-99% of the people who get the virus survive, it is not a national or world crisis, but yet that is what the media wants you to believe.  Trump has shown that even someone over the age of 70 can get proper medical treatment and get past the virus. What the media has failed to tell people from the beginning is that almost all of the deaths, and there have been hundreds of thousands in the United States, have occurred among the eldery who already had underlying health conditions. Almost everyone survives this virus and it has been shown that lockdowns do no good.  This has never been about saving lives; it has been about getting power and keeping it.

Four years ago it was Trump trailing Clinton in the polls and in the odds and there was a supposed bombshell with Trump talking to Billy Bush. That tape was supposed to hurt Trump and while the odds moved, the overall poll numbers were wrong and Trump ended up winning the election. The question is will it happen again?

There are many people who believe that the country is headed for civil war because of the deep divide. A recent YouGov poll of 1,505 voters found that more than half of the people believe there will be an increase in violence because of the election.

"A close, contested election in our hyper-polarized political climate could very well produce isolated incidents of partisan violence," Alex Theodoridis, an associate professor of political science at the University of Massachusetts-Amherst, said to the media, "My research, and work by others, shows that most partisans are willing to metaphorically dehumanize those from the other party, and that this dehumanization predicts greater tolerance for partisan violence."

What would a civil war in the United States look like today?  Would it be isolated incidents similar to what has already occured with the rioting and looting in some of the major cities or would it be armed confrontations in multiple cities?  Would the effects be felt in all areas in terms of the economy, sports, civics, etc?  Most reasonable people hope that we never have to find out.