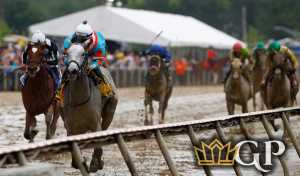 Country House reminded bettors how fun it can be to choose a longshot, winning the Kentucky Derby as a huge underdog due to the disqualification of Maximum Security.

Country House reminded bettors how fun it can be to choose a longshot, winning the Kentucky Derby as a huge underdog due to the disqualification of Maximum Security. The Preakness Stakes is the next stop among the prestigious races, but neither of those horses are going to be in the field.

The lack of some buzzworthy horses has taken a bit of the luster off this race, but it has also opened up a golden opportunity for the longshots to make a name for themselves and win the Preakness. Country House paid off handsomely and there are several underdogs that will look to duplicate that feat on Saturday.

There are a few of them that could make it happen at the Preakness Stakes in horse racing betting.

We'll have horse racing odds available for every race of 2019.

There are two clear horses to beat at the Preakness, as Improbable is the favorite and War of Will the main contender. After that, there is a case to be made that several of the other horses in the field have what it takes to make a move.

Bourbon War is listed at 10-1 and has flashed his bona fides in several previous races, including a recent showing in which he nearly tracked down the talented Code of Honor. Bourbon War can be inconsistent but has the top-end ability to be in the mix for the win.

Anothertwistafate has been either the winner or the second-place finisher in several recent races. Even though the competition is tough in this one, odds set at 12-1 are certainly intriguing for a horse that can be dangerous if the right opportunity presents itself.

Market King is among the biggest of underdogs at the Preakness. While there has been little shown thus far to believe he is a contender, it helps that Hall of Fame trainer D. Wayne Lukas is helping prepare him for this race. Even so, it would be a shock for Market King to come out on top.

Bourbon War is tied with Owendale for the fifth-best odds to win the Preakness, and will need some help in order to finish ahead of the favorites. However, it is rare to get this type of payout for a horse as talented as this one.

The field is not as strong as expected and that will allow for some of the longshots to make a move. Bourbon War will be the one to take full advantage in horse racing betting.