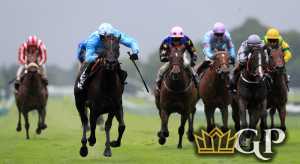 It was a wild race at the Kentucky Derby this year, as Maximum Security finished first but was later disqualified for nearly causing a pileup.

It was a wild race at the Kentucky Derby this year, as Maximum Security finished first but was later disqualified for nearly causing a pileup. Instead, longshot Country House was given the victory. Country House will not make a try at the Triple Crown, as the horse was pulled out of Preakness consideration after developing an illness.

Country House was an extremely long shot to win the Triple Crown before his illness, as he was 20/1 to pull off the feat. That’s because he was a big-time underdog to even win the Kentucky Derby and needed the help of a disqualification to pull it off. Country House was listed at 65/1 and was able to finish in second place before getting moved up because of the mistake by Maximum Security.

Country House had the second-highest odds of any Kentucky Derby winner, trailing only Donerail in 1913. Country House was sired by Lookin at Lucky, who won the Preakness in 2010.

It’s a shame that two other horses weren’t able to be the contender to win the Triple Crown. Maximum Security was the fastest horse at the Kentucky Derby and it was a big controversy when he was penalized for making an unfair move in the middle of the race.

Country Horse was the lucky winner in the Kentucky Derby but was in truth not able to stay with Maximum Security down the stretch. The Triple Crown has become more common in recent years but it’s not going to happen in 2019.  The current favorite to win the Preakness is Improbable at odds of +300 and he looks like a good choice leading up to the race.

Horse Racing Pick: Improbable to win the Preakness at +300