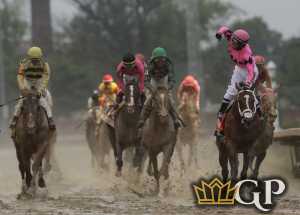 No one knows that is going to happen at the Kentucky Derby this year. Sure, famed trainer Bob Baffert has three horses in the race, but Omaha Beach was the favorite and has now been pulled due to illness, further leading to a muddled mess among the field.

There is no clear-cut choice to win, and that is a good sign for the large group of longshots that haven't quite put everything together in their careers but have a chance to do so on the brightest stage this weekend. There are some intriguing horses with the right odds, as an upset win by one of the underdogs would pay out astoundingly well.

While a longshot victory would be a surprise, it wouldn't be a shock with the way the field is shaping up in 2019. It makes sense to take a close look at these options heading into the Kentucky Derby in horse racing gambling.

Game Winner may not be an American Pharoah-like horse but oddsmakers agree that this is the pick to win the Kentucky Derby now that Omaha Beach is out of the running. However, there is still a greater than not chance it does not happen, which is why the longshot bets are going to be coming in routinely heading into the race.

Some of the other favorites include Tacitus, Roadster and Improbable, but at those odds it makes more sense to choose a different longshot horse that would pay off better.

Maximum Security is the type of medium-range longshot that makes a bunch of sense to hitch your wagon to at the 2019 Kentucky Derby. Maximum Security is the only undefeated horse in the field, but with only four races under his belt there is plenty to wonder about, especially in a field like this against a bunch of other elite horses. However, jockey Luis Saez is a good one and there is plenty of potential residing in this horse. There is some concern about the inexperience of Maximum Security, especially if he canno't get out ahead of the pack early, but at +885 odds there are certainly worse options on the board.

War of Will is another horse that has some talent. However, the tough part of the equation is starting the race at the 1 post, which makes for a really tricky path to victory. It will take a really smart game plan and maybe a bit of luck to be in position to make some noise, but if War of Will can navigate that treachery early, those +1616 longshot odds will suddenly be looking pretty good down the stretch of the race.

One of the more popular longshot choices is Win Win Win. He won the Pasco Stakes in January and has also shown some bright spots in his past two races. The longer distance of the Kentucky Derby should play into his strengths. Win Win Win is not the fastest out of the gate, but he will aim to keep the others in his sight and try to blow past them down the home stretch. The odds of +2253 mean Win Win Win could get plenty of action to pull off the upset.

Another intriguing longshot candidate is By My Standards. He won the Louisiana Derby and would love to keep up the momentum in this one. Unlike some of the other longshots, By My Standards has the ability to get off to fast starts, and doing so could be enough of a boost to have him among the contenders at the end.

Spinoff was the horse that was breathing down the neck of By My Standards at the Louisiana Derby but couldn't quite come away with the win. Even so, a better route in the Kentucky Derby would give him a better chance. Spinoff lacks experience, which means there is a lot of boom or bust potential here. But at long odds this is the type of horse to take a flier on.

There are some super longshots that make sense to throw some money on, especially Spinoff. But the horse that figures to have the most realistic shot a the victory among this group is Maximum Security.

There is a lot to like about this horse, as he has made things look easy to this point in his career. It's a big jump facing off with elite horses but Maximum Security has what it takes to be the winner even as a longshot in horse racing odds.