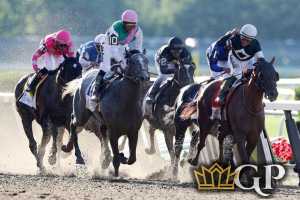 War of Will avoided congestion at the Preakness and put together an impressive race to finish ahead of the pack for the victory. The competition at the Belmont Stakes could be tougher, but he has similar goals in this one.

War of Will avoided congestion at the Preakness and put together an impressive race to finish ahead of the pack for the victory. The competition at the Belmont Stakes could be tougher, but he has similar goals in this one. While War of Will won’t be winning the Triple Crown, a second consecutive victory would nonetheless be an impressive feat, and he is one of the favored horses.

Tacitus is the other main candidate to win this final leg of the Triple Crown racing, but there are also plenty of longshots lurking and trying to pull the upset. It has been a newsworthy first two races, as Maximum Security was disqualified after winning the Kentucky Derby, and then a jockey-less horse finished the Preakness.

We will see if there is any more zaniness awaiting at the Belmont Stakes in horse racing gambling.

We'll have horse racing odds available for every notable race of the 2019 calendar year.

A Look At The Favorites

War of Will is the only horse who is going to race in all three of the Triple Crown events. On pure talent he may be the best horse, but fatigue is a concern, especially considering the longer distance of the Belmont Stakes. However, War of Will looked good at the Preakness and is aiming to become the 12th horse to win the second and third legs of the Triple Crown despite failing to win the first. If it happens, plenty will wonder if War of Will lost his chance at history by getting bumped by Maximum Security at the Kentucky Derby.

Tacitus was one of the favorites at the Kentucky Derby but ended up finishing fourth, although that was elevated to third based on Maximum Security’s disqualification. Tacitus did not run the Preakness, which means it will be a fresh horse for this race, and is part of the reason why the odds have instituted him as the favorite. Tapit’s descendants have won three of the past five Belmont Stakes, and Tacitus hopes to keep that going as he is Tapit’s son.

Master Fencer is one of the longshots with a legitimate chance at making a run at the Belmont Stakes crown. There is no doubt about his kick, so the trick will be staying close enough to make a push down the stretch.

Bourbon War was a longshot pick at the Preakness but finished a disappointing eighth place, which was the worst of his career. Bourbon War is hoping that race helped shake off some rust, and that he will be in better position to make a run in this one.

While it makes sense to see War of Will and Tacitus as the favorites, there have been plenty of surprises in the Triple Crown races thus far and it will continue at the Belmont Stakes. Spinoff did not look good at all at the Kentucky Derby, but a nice rest and the expert training of Todd Pletcher could make him a surprise contender.

With longshot odds, Spinoff is the choice to shock the field and claim the Belmont Stakes victory in horse racing gambling.