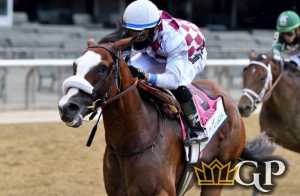 All three of the top contenders for the 2020 Kentucky Derby will start on the outside. Tiz the Law has post 17, a post that has never won the Kentucky Derby. Trainer Barclay Tagg was not worried at all about the outside position.  “I like being on the outside, I didn’t particularly want to be out that far but he seems to handle everything that’s thrown at him so we’ll just have to leave it up to him.” Tagg said, “It gives you a chance, if you have any speed at all, it gives you a chance to get a better position."

Authentic will start from post 18 and that post actually won the race a year ago when Country House was given the victory after Maximum Security was disqualified. Honor A.P., with Mike Smith in the irons, will start just inside of Tiz the Law in post position 16.

The field for the Derby lost a top contender when Art Collector was scratched due to a foot injury. That defection seems to make it a much easier race for Tiz the Law.

If you look simply at the odds then there are only three horses that have any chance of winning this race. Tiz the Law is the clear choice, while Honor A.P. and Authentic are expected to be in the mix. Recent history almost has to be thrown out when it comes to this year’s Kentucky Derby because the race is being held at a different time and in a different situation. One thing that should still apply though is that the winning horse has to finish fast. Each of the last eight Kentucky Derby winners and 18 of the last 22 winners has run the final three-eighths of their final prep race in less than 38 seconds.

I think Tiz the Law wins the Kentucky Derby going away. If you want to throw in a flyer on a longshot then Enforceable is my choice. He has finished under 38 seconds in his final three-eighths a couple of times this year and he is listed at odds of 30-1.  For a trifecta I would box Tiz the Law, Honor A.P., Enforceable and Storm the Court.