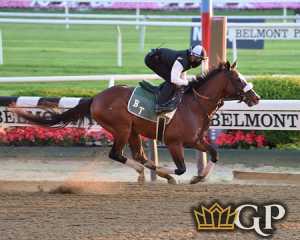 You can bet the Belmont Stakes right now at top online sportsbooks. Saturday’s Belmont on NBC will be the first race in the Triple Crown and it is Tiz the Law listed as a solid favorite. Check out Belmont Stakes betting odds and Belmont Stakes picks.

You can bet the Belmont Stakes right now at top online sportsbooks. Saturday’s Belmont on NBC will be the first race in the Triple Crown and it is Tiz the Law listed as a solid favorite. This year’s Triple Crown will look a lot different, as the Kentucky Derby is not until September and the Preakness will be in October. This year’s Belmont will be run at a mile and an eighth instead of a mile and a half, so it is not anything like previous years, and no fans will be in attendance. Post time for the 152nd running of the Belmont Stakes is 5:42 p.m. Eastern Time on Saturday on NBC.  Let’s look at Belmont Stakes betting picks.

The Belmont will actually be the shortest of this year’s Triple Crown races instead of the longest. “Our racing committee looked at it and basically unanimously said, let's go in June at a mile and an eighth," Martin Panza, senior vice president at the New York Racing Association said to the media, "Let's not stress these horses and try to get them to go a mile and a half when they might not be prepared to do that." This year’s Belmont field will have 10 horses and there is no question that Tiz the Law is the stand out in the field. The main challenger looks to be Tap It to Win who is trained by Mark Casse who won the Belmont last year with Sir Winston.

Trainer Todd Pletcher has won the Belmont three times and he has two horses in the race in Dr Post and Farmington Road.  Trainer Linda Rice is trying to become the first female trainer to win the race as she sends out Max Player.

If Tiz the Law runs his race then the Belmont is not going to be close. Tiz the Law has three graded stakes wins and he has the best Beyer Speed Figure in the race and it really isn’t close.

Exacta Box – Tiz the Law and Tap It to Win

Check out the latest Belmont Stakes betting odds at the online sportsbook.