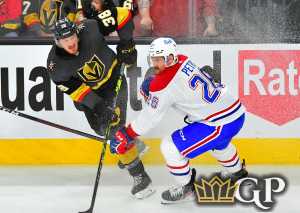 NHL Playoff best bets for the weekend of June 19-20 feature all four remaining teams in action. Let's look at the weekend matchups between the Lightning and Islanders and Golden Knights and Canadiens and Weekend Stanley Cup Playoff Best Bets.

This series between the Lightning and Islanders has been very evenly matched and there is not much separating the two teams. In my preview I noted that Tampa Bay had a slight edge in the series, but that it was not a big edge. The Stanley Cup Playoff Odds for this series have been extremely tilted toward Tampa Bay and that is still the case. The Islanders have been underrated, but they have shown time and time again that they match up really well with the Lightning.

The teams split their two games in Tampa with the Islanders winning a low scoring 2-1 game, while the Lighting won the second game by a score of 4-2. For the Islanders to win this series they need to play a tight, low scoring game. New York is not going to win many shootouts against the Lighting.

What we do know about Game 4 is that the value will be on New York. The Lightning were listed as a slight road favorite in Game 3 with a total of 5.5 and I expect a similar line on Saturday. The Islanders have been very good on home ice this season and there is no reason they can’t win this series. I’ll make two plays in this one and take the Islanders and the game under the total.

The Golden Knights were an excellent home team this series, but Vegas was also a solid road team, as they went 19-9 on the road during the regular season. Montreal didn’t have much of a home ice advantage in the regular season and I don’t give them much of an edge at home in the playoffs. Canada hasn’t been allowing many fans and Montreal will not have a full house for this game.

There is no question that Vegas is the better team, but Montreal showed in Game 2 that they can play with the Golden Knights if Vegas isn’t focused. There is no reason for Vegas to not be focused on the road, as they don’t have the pressure of playing at home and they don’t have to try and impress their fans. Vegas may actually be better off playing in Montreal, as their game can be more physical and more focused.

The question for Vegas in this series is whether or not Marc-Andre Fleury can play at a high level. Yes, I know he had a great regular season and has looked very good in the playoffs, but there have been some rare instances where he has struggled. He is capable of letting in some questionable goals and if he struggles then Montreal has a chance in this series. Fleury was great in Game 1 and Vegas rolled, but he wasn’t that great in Game 2 and the Golden Knights lost. We thought that Montreal goaltender Carey Price would be the key goalie in this series, but it very well may be the key goalie is Fleury.

I expect the Golden Knights to play a much more defensive style on Sunday and pull out a close win, so I will take Vegas and the game under the total.