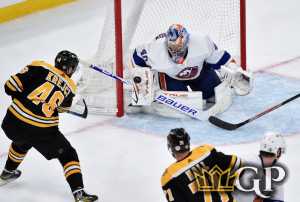 NHL Playoff best bets for the weekend of June 5-6 feature all eight remaining teams in action. All of the games are on national TV including the Boston Bruins and New York Islanders on NBC. Let’s look at this weekend’s Stanley Cup Playoff Best Bets.

NHL Playoff best bets for the weekend of June 5-6 feature all eight remaining teams in action. All of the games are on national TV with the feature game on Saturday on NBC matching up the Boston Bruins and New York Islanders. These teams are very evenly matched and Game 4 should be another exciting contest. The other game on Saturday is a matinee, as the Carolina Hurricanes visit the Tampa Bay Lightning in Game 4 of their series. The two games on Sunday have Winnipeg at Montreal in Game 3 of their series and Game 4 of the series between the Colorado Avalanche and Vegas Golden Knights. Let’s look at this weekend’s NHL best bets.

This game takes place during the day on Saturday and can be seen on USA Network. Many people expected that the Hurricanes could match the Lightning in this series but Carolina couldn’t do anything offensively in the first two games of the series and now they have to find a way to win at least two games in Tampa. It seems unlikely, as the Lightning have advantages across the board. Carolina is still a good team and I think they will win at least one game in Tampa to send the series back to Raleigh for Game 5. This play is dependent on what happens in Game 3, as if the Lightning win I will take Carolina to avoid the sweep in Game 4, but if the Hurricanes win Game 3 then I will pass on this one.

This game can be seen on NBC on Saturday night. When this series began a lot of people thought the games would be low scoring but I was not one of those people, as I took Game 1 to go over the total. The scoring has continued in this series, despite both teams having good goaltending. Despite the Bruins having a lot of talented players, I still don’t trust them in big games. I particularly don’t trust Tuukka Rask to win a big game. I know he can play really well and many people consider him a top goaltender, but I have a lot more faith in the two New York goaltenders. I will lay the small price and take the Islanders to win Game 4.

This game can be seen on NBCSN on Sunday. I am surprised, just like many other people, that Montreal is still alive in the playoffs. Not only is Montreal alive, but they may end up winning this series against Winnipeg. There is no question that the Canadiens have the edge in goal with Carey Price and so far the Canadiens have had a lot of other edges. I am still not entirely sold on Montreal and I think they have some weaknesses on defense and I don’t know that their scoring depth is good enough. I think Winnipeg will play better in this series and I don’t give Montreal much of an edge at home. We will definitely get a better price on the Jets on the road and I will take them to win Game 3.

This game can be seen on NBCSN on Sunday night. I think these are the two best teams in the NHL but unfortunately one of them is going to be gone after this series is over. Vegas didn’t show up in Game 1 and was put immediately behind the eight ball but they outplayed Colorado for most of Game 2. The Golden Knights just couldn’t find a way to beat Grubauer. Vegas was a very good home team this season and I expect them to win at least one game and perhaps two to send the series back to Colorado for Game 5. The Golden Knights are capable of playing at a high level and they proved in Game 2 that they can play with the Avalanche. I will take Vegas to win Game 4.