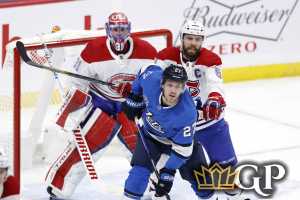 NHL best bets for the weekend of April 10-11 feature all of the top teams in action. We are coming off a 7-4 weekend and that makes it 17-4 the last two weekends with NHL best bets. Let’s look at this weekend’s NHL best bets.

NHL best bets for the weekend of April 10-11 feature all of the top teams in action and some excellent NHL betting trends. It is a big slate of NHL games for Saturday, April 10, with 10 games on tap, including two matinees, as the Boston Bruins visit the Philadelphia Flyers, while the Florida Panthers are in Dallas to take on the Stars. There are a total of seven games on Sunday, April 11. We are coming off a 7-4 weekend and that makes it 17-4 the last two weekends with NHL best bets. Let’s look at this weekend’s NHL best bets.

If you have been following the NHL this season then you know that teams are playing within their division exclusively. This has meant that teams are oftentimes playing a set of games against each other. What has been happening in the second game of these series is that the games are lower scoring and they are going under the total. We have three of those games on Saturday and four on Sunday.

The first of our system plays for this weekend has the Jets at the Canadiens. These teams played on Thursday night. It is always a little scary playing Winnipeg games under the total, but Montreal plays a defensive style and there is no arguing with a system that is rolling, so we take this game under the total.

The Wild and Blues played on Friday night. Both teams have struggled at times to score goals and each is solid on defense. This looks like a solid under and it is a system play.

These two teams are trying to stay in the playoff hunt. They played on Friday so this is a system play. Neither team is that great on defense so this is a bit scary, but we won’t argue with the system and take this game under the total.

The one game on Saturday that we are going with that is not part of the system is this late one in Calgary. The Oilers are scoring a lot of goals and their goaltending is average at best, while Calgary is not playing nearly as well defensively under Darryl Sutter as many people thought they would. We’ll take this game over the total.

These teams played on Friday night, so this is another system play. Vegas home games are always a little scary to play under, but we had one last week and it worked out just fine. We’ll take the Coyotes and Golden Knights under the total.

The Avalanche are an excellent defensive team and Anaheim struggles to score goals. This is another system play, as these teams played on Friday. We’ll go under the total with Colorado and Anaheim.

The Penguins are a much better defensive team than you might think and the Devils struggle to score goals. These teams played on Friday, so this is another system play. We take the game under the total.

This is another system play, as the teams played on Friday. The Rangers are trying to make a late playoff push and they are scoring a lot of goals, so this play is a bit scary, but we still play the game under the total.

This game is not a system play, but it looks to be a good spot for the Capitals. They had Saturday off, while the Bruins were playing a key game against the Flyers in Philadelphia. It is always worth considering when you get a rested team against a team playing with no rest and in this case, the Bruins should really be worn out. I will take the road team here and go with the Capitals.