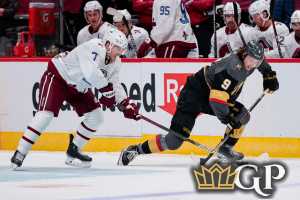 NHL best bets for the weekend of March 27-28 feature a number of top teams in action and some excellent NHL betting trends. Let’s look at this weekend’s NHL best bets.

NHL best bets for the weekend of March 27-28 feature a number of top teams in action and some excellent NHL betting trends. It is a big slate of NHL games for Saturday, March 27, with 11 games on tap, including four matinees, as the Rangers visit the Flyers, the Sabres visit the Bruins, the Blue Jackets are in Detroit to face the Red Wings and the Golden Knights are at the Avalanche. There are a total of seven games on Sunday, March 28 including four nationally televised contests. We are coming off a very profitable 5-2-1 with the NHL best bets from last weekend. Let’s look at this weekend’s NHL best bets.

If you have been following the NHL this season then you know that teams are playing within their division exclusively. This has meant that teams are oftentimes playing a set of games against each other. What has been happening in the second game of these series is that the games are lower scoring.  We have two of those games on Saturday and four on Sunday, plus a couple of other games that go right along with this system.

These two teams are thought of as high scoring teams but Calgary is definitely more defensive oriented under Darryl Sutter. Seven of the last ten in this series have gone under the total. These two met on Friday so that means we take Saturday’s game under.

These two met on Friday night so that makes this one a system play on the under. This one is a little scary, as these teams have gone over in their last three meetings, but we don’t argue with the system and take this game under the total.

We’ll step out of the system for one play on an over and that is on the game between the Oilers and Maple Leafs. Neither of these teams plays any defense and both teams have questionable goaltenders. I will go over the total with the Oilers and Leafs.

This is not a true back-to-back, as the teams met on Thursday and then had Friday off, but it is the second straight game against each other, so we’ll follow along in a sense with the system and take this game under the total.

The Red Wings are having a tough time scoring and these teams met on Saturday, so that makes this game a system play. We’ll go under the total with the Blue Jackets and Red Wings on Sunday.

I don’t take that many underdogs, but this is a good spot for the Devils. This is the third game in four days for the Bruins and they are playing with no rest, as they hosted the Sabres on Saturday. I will take the Devils at plus money.

The Lightning score a lot of goals but they also have the best goaltender in the league in Andrei Vasilevskiy and one of the best defensemen in the league in Victor Hedman. These teams met on Saturday so it is a system play on the under.

The Panthers can play tight defense and the Stars are definitely a defensive team. This is another system play, as the teams played on Saturday. We’ll go under the total on Sunday with the Panthers and Stars.

The Predators are having major problems scoring goals and that helps this play but the reason we are taking the under is that the teams played on Saturday. We’ll go under the total with the Predators and Blackhawks.

This is an interesting play, as the Ducks and Blues did play each other last time out, but the game was on Friday and then they had Saturday off. We’ll still throw this one in there and take the game under the total.