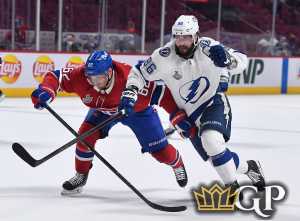 The Montreal Canadiens visit the Tampa Bay Lightning in Game 5 of the Stanley Cup Final on Wednesday night on NBC. The Lightning lead the best-of-seven series 3-1, but the Canadiens have a little life after winning Game 4 in overtime. Tampa’s mayor was hoping that the Lightning would lose Game 4 so that the team could clinch the Cup in Game 5 at home. She is probably hoping she doesn’t regret those words, because giving a team life is never a good idea. Let’s look at Stanley Cup Finals odds for Game 5 and hockey picks.

It is no surprise to see Tampa Bay favored in this one, as they have been a very good home team this season and most people expect them to close out this series on Wednesday night. There has not been a lot of line movement on this game, but it is hard to see anything other than movement toward the Lightning.

The Lightning are a big favorite to close out this series on Wednesday night. The Canadiens were able to win Game 4 on Monday, but they definitely got some help, as the Lightning hit three posts in the loss. Montreal does seem to have found something with the new line combination of Josh Anderson with Nick Suzuki and Cole Caufield, but it may be too little, too late.

The Canadiens have an uphill battle, as only once in NHL history has a team come back from 0-3 in the Stanley Cup Finals to win the title. There have only been four instances in NHL history where a team came back from an 0-3 deficit to win a series. Montreal head coach Dominique Ducharme said that he is not surprised that his team rallied to win Game 4. "For me, it's not surprising," Ducharme said to the media, "We've been through a lot. We've talked about it. That's another challenge that we have. Tonight we played hard; it was not perfect. But we still feel we can be better. We'll do that in Tampa. We won't go easy, that's for sure."

The Canadiens are going to have to play better if they expect to win a game in Tampa. Montreal is still giving away the puck far too much and the Lightning have scored 11 goals in this series off Montreal turnovers.

When I made the pick for Game 3 I was very confident that the Lightning would play a good game and get the win. I think Tampa will get this win in Game 5, but I don’t think it will be easy. The Lightning gave the Canadiens a lifeline and Montreal now has a little confidence. The Lightning are still the better team across the board than the Canadiens and they have been very good on home ice. I am a little leery laying the big price in this game, as Tampa will be facing the pressure of winning this one in front of their home fans. I still think they will find a way to get this win, as I can’t back Montreal when they don’t really have anything going for them. I will lay the price and take the Lightning to win Game 5 on Wednesday night.