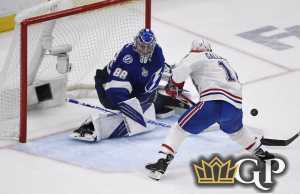 The Tampa Bay Lightning visit the Montreal Canadiens in Game 3 of the Stanley Cup Final on Friday night on NBC. The Lightning lead the best-of-seven series 2-0 after winning two games at home and now the series shifts to Montreal for the next two games. Friday’s contest is virtually a must-win for the Canadiens, as coming back from an 0-3 hole against Tampa would be almost impossible. Let’s look at Stanley Cup Finals odds for Game 3 and hockey picks.

The early money on this game is on the Canadiens, as the line opened with the Lightning listed as a -150 favorite. If Montreal is to win a game in this series it would seem logical that it would be Game 3, but the problem with taking the Canadiens is that they just played their best game of the series and lost. Game 3 takes place on Friday night on NBC with a start time just after 8 p.m. Eastern Time.

As noted earlier, the problem for Montreal is that they played a good game on Wednesday and still lost. The Lightning did not play that well, but they have the best goaltender in the world in Andrei Vasilevsky and he made 42 saves in the Game 2 win. Montreal goaltender Carey Price gets a lot of attention from the media, but the reality is that Vasilevsky is already a Stanley Cup champion and he takes his play up a level in the Stanley Cup Playoffs.

Montreal was able to contain Tampa Bay stars Nikita Kucherov, Brayden Point and Steven Stamkos, but the Lightning are a very deep team and in Game 2 it was Anthony Cirelli, Blake Coleman and Ondrej Palat who scored for Tampa Bay. The Canadiens outshot Tampa 43-23 but only got one goal. “I thought we had a good bounce-back game. Had a lot of chances. Just got to find ways to put the puck in the back of the net, myself included,” said Montreal’s Nick Suzuki to the media.

Montreal is trying to stay positive even though they are down two games to none. “The message is, don’t stop doing what we’ve been doing all playoffs. You look at what happened in the first round, we were down 3-1,” Corey Perry said to the media, “We stayed focused, stayed with our game plan, never changed, never did anything and continued to push. It’s no different now.”

The Canadiens are fighting some series history, as teams that go up 2-0 in the Stanley Cup Finals have gone on to win 90% of the time.  Tampa is 25-10 in their last 35 playoff games as a favorite. Tampa is 4-1 in the last 5 meetings in Montreal.

I know that most people are thinking that Montreal will win Game 3, but I have two major problems with taking the Canadiens. First, Tampa is the better team across the board than Montreal. In previous matchups in the playoffs, the Canadiens had the edge in goal but they don’t have that advantage in this series.  Price is a good goaltender, but Vasilevsky is slightly better. And Montreal has no advantage in terms of scoring and defense, as Tampa is simply better all over the ice. Second, the Canadiens just played their best game and Tampa played their worst game and the Lightning still won. I expect Tampa to be better in Game 3 so I will take the Lightning and also play the game under the total.