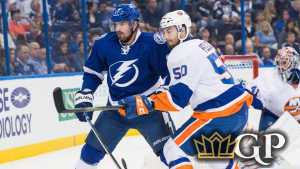 The New York Islanders will play the Tampa Bay Lightning in the Stanley Cup semifinals. This is a rematch of last year’s Eastern Conference Finals that the Lightning won four games to two. Let’s look at the series between the Islanders and Lightning.

The New York Islanders will play the Tampa Bay Lightning in the Stanley Cup semifinals. This will be a rematch of last year’s Eastern Conference Finals that the Lightning won four games to two. Tampa Bay is listed as a -220 favorite to win this series in Stanley Cup odds at top online sportsbooks. The Islanders have the better defense, while the Lightning have the better offense. The goaltending matchup leans slightly to Tampa Bay, as they have Andrei Vasilevskiy, while the Islanders have Semyon Varlamov.  Let’s look at the series between the Islanders and Lightning.

The Lightning have home ice advantage in this series and they are listed as a -180 favorite to win Game 1 at top online sportsbooks with the total listed at 5.5 under. Tampa has had a tough road to this point, as they had a very difficult first round series against Florida that they pulled out in six games and a much closer than indicated series against Carolina that they won in five games. Tampa beat the Islanders last season in six games in the Eastern Conference Final and then went on to defeat the Dallas Stars in the Stanley Cup Finals.

The Lightning have benefited in this year’s playoffs from the return of Nikita Kucherov, who missed the entire regular season due to hip surgery. He has five goals and 13 assists in 11 postseason games. The Lightning realize that they have not met their goal yet and that they can’t have any letdown. "There's still so much work to be done. We can't get too high here.” forward Brayden Point said to the media, “We've got to have some good practice days and wait for our next opponent."

Steven Stamkos has five goals and eight assists in this year’s playoffs. Alex Killorn has six goals and six assists, while Victor Hedman has 11 assists. Andrei Vasilevskiy is 8-3 with a 2.24 goals-against average and .934 save percentage.

The Islanders have had plenty of time to think about last season’s loss to the Lightning, but head coach Barry Trotz said that his team has not spent a ton of time looking at Tampa. "We've talked zero about Tampa Bay, zero," New York coach Barry Trotz said to the media, "We started out this journey to beat Pittsburgh. We were able to do that and then we focused in on Boston. We will get a shot to go against the champs again."

“You have to beat the best if you want to win it all,” said Brock Nelson to the media, “I don’t think anyone’s been sitting here thinking about revenge on Tampa. Just taking each series one at a time. Now we can turn the page and turn our focus on them.”

The Islanders have gotten contributions from a lot of players in this year’s playoffs. Jean-Gabriel Pageau leads the team with 13 points (three goals, 10 assists) this postseason. Josh Bailey has five goals and six assists, Anthony Beauvillier has four goals and seven assists and Kyle Palmieri has scored seven goals. Semyon Varlamov is 4-3 with a 2.62 GAA and .925 save percentage.

"We've got a group of guys that have been together quite a while and we've added some key pieces, and when you get into these high intensity situations and guys just keep showing up for one another and it just builds a bond," Josh Bailey said to the media, "It's going to be no easy task. I think Tampa [Bay] has a great team, the defending Cup champs. So, it's going to be tough, but we believe in ourselves and we know we're going to need our best to find a way to take them down."