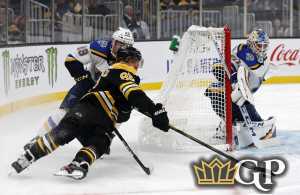 While the Boston Bruins were the opening favorite at Top rated sportsbooks for the Stanley Cup Final many experts saw the matchup as even. Both teams are deep and can roll multiple lines. Each has excellent goaltending.

While the Boston Bruins were the opening favorite at Top rated sportsbooks for the Stanley Cup Final many experts saw the matchup as even. Both teams are deep and can roll multiple lines. Each has excellent goaltending. The Bruins and Blues opened the series with deep defensive corps. And each team is exceptionally well coached. So far Boston has learned about the famed St. Louis resiliency. And the Blues have learned that a sloppy performance cannot be overcome against such a talented Bruins team. With this series tied at 2-2 it’s become a best of three for the Stanley Cup!

Following a 4-2 St. Louis win in game four at Offshore sportsbooks this series is tied at 2-2. Game six will be at St. Louis on Sunday. If necessary, a seventh game will be at Boston on Wednesday.

Last Saturday in game three the Blues took home ice for the first time in a Stanley Cup Final since 1970. The entire city of St. Louis spent the day partying, signing and chanting with excitement. As a result, the Blues were likely too fired up for the game. And after a quick St. Louis sugar rush at the start in which they came up dry, the Bruins took over and carried the play the rest of they way en route to a 7-2 win. The Blues were not only dominated but they knew that they let down the city. In game four they took full ownership and responsibility with a tight, well played 4-2 win. This time it was the Blues that carried the play.Boston was often gassed chasing the Blues around for long periods of time. St. Louis eliminated stupid penalties, selfishness, and sloppy play for a series evening win.

Of great concern to both gamblers and the Bruins is what is becoming a thin blue line. First, captain and rugged defenseman Zdeno Chara is questionable after taking an ugly deflected puck to the face. Chara missed the second half of the game due to that incident and what was already a depleted defensive corps became even more perilous. Of additional concern is the concussion issue of defenseman Matt Grzelcyk. He is questionable for game four as well.

St. Louis has been at their best when on enemy ice. The Blues have won eight of their last 11 post season road matchups. Only two of their last eight away games have gone over the total.

Boston has been a strong home team in the post season as well. The Bruins have won six of their last eight games at TD Garden. Four of their last five home tilts have gone over the total at online sportsbooks.

So far this has been a Bruins, Blues, Bruins, Blues series with each team getting a win and a loss both at home and on the road. Four of the five games in this Stanley Cup Final have gone over the total. Boston has won three of their last four home games against St. Louis. Two of the last three between these teams at TD Garden have gone over the total.

Betting value should always be of great concern to gamblers. And in this case Boston has the possibility of being an overlay based on their Original Six marquee brand and what the public perceives to be home ice advantage. St. Louis has proven to be the most resilient team in the NHL and one that is incredibly difficult to kill off. On the whole the Bruins are starting to be worn down by the rumbling Blues.