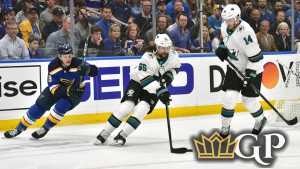 Wednesday night’s game three of the Western Conference Final between the San Jose Sharks and St. Louis Blues was the ultimate roller coaster ride at Top rated sportsbooks. San Jose jumped all over the Blues to take a 3-1 lead early in the second period. From there St. Louis carried the play with three straight goals to take a 4-3 advantage heading into the final period. That Blues lead lasted all the way to the final minute and one second of regulation play before Logan Couture lit the lamp to send the game into overtime. Erik Karlsson got the game winner in OT with the help of an illegal hand pass that the refs missed and was not subject to video review. Insanity then followed!

With their epic 5-4 overtime win in game three, tainted as it may be in the eyes of many at Offshore sportsbooks, the Sharks hold a 2-1 series lead in this best of seven series. Most important of all is the fact that San Jose can take a commanding 3-1 series lead back home to the Shark Tank on Sunday with the chance to clinch the series and advance to the Stanley Cup Final if they win game four. In essence the Blues are facing a must win fourth game at home Friday Night.

San Jose is led by center Logan Couture, who has emerged as a top Conn Smythe Trophy candidate as the most valuable player in the playoffs. Couture’s game three heroics in which he tied the tilt late to send it into overtime are part of an incredible story. So far in the post season Couture has a whopping 14 goals to go with six assists and a plus eight. Its also no accident that Erik Karlsson loomed large with the game winning goal. Karlsson is one of the most talented offensive defensemen in the game as evidenced by his 13 assists and two goals thus far in post season. Goaltender Martin Jones can be inconsistent but has also been at his best when it has mattered most.

St. Louis has been led by left wing Jordan Schwartz and his nine goals with four assists and a plus four. Defenseman Alex Pietrangelo rivals Karlsson in offensive skill and ability with 10 assists and two goals. Rookie goaltender Jordan Binnington, despite his struggles in game three, is the reason that the Blues got to the playoffs and has been clutch more often than not.

San Jose has had a slight recent edge in their head to head series with St. Louis. The Sharks have won four of the last seven matchups with the Blues as the last three games between these teams cleared the total. At Enterprise Center the Blues have won three of their last five games with the Sharks. Only two of the last eight games in this series at St. Louis have gone over the total.

Look for an all-out Blues effort in this one with so much at stake. The hockey gods keep smiling on the Sharks. Usually there is an eventual price for that!