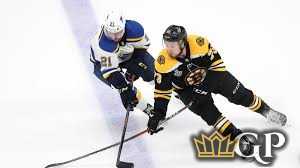 At the onset of the Stanley Cup Final the Boston Bruins were the Top rated sportsbooks favorite to win the series. Much of that was based on the Bruins blue blood status as an established power with a marquee public brand.

At the onset of the Stanley Cup Final the Boston Bruins were the Top rated sportsbooks favorite to win the series. Much of that was based on the Bruins blue blood status as an established power with a marquee public brand. The Blues have not had much in the way of playoff experience since last reaching the Stanley Cup Final in 1970, when ironically enough, they were swept by the Bruins. But now the Blues have a shot at history. They can win the first Stanley Cup championship in the history of the franchise with a win at home in game six against Boston.

St. Louis scored a highly controversial 2-1 Offshore sportsbooks win in game five at Boston. The Blues took a 2-0 lead and got their second goal seconds after a missed tripping call in the Boston zone that should have gone against St. Louis. Boston players, executives, and fans went berserk after the blown call as the ice was littered with garbage. But Boston lost focus in the madness and was not able to rally for the tie. The Blues now lead the best of seven series 3-2 and can end the series with a win in game six. Should the Bruins win, a game seven would take place on Wednesday at Boston.

First, the Blues have been the most profitable team on the board so far in the playoffs. Boston has made the third most amount of money this post season. Boston ranks second in the playoffs for goal scoring while the Blues are fourth in the NHL playoffs for goals scored. Boston is the top ranked post season team for goals against while St. Louis ranks seventh in that category. Boston has the top ranked playoff power play while St. Louis ranks 11th. Post season penalty killing shows the Bruins ranked fourth best with the Bleus ranking 12th.

St. Louis has won three of their last four home games against the Bruins. Five of the last seven between these teams at St. Louis have gone over the total.

St. Louis plays the heaviest brand of hockey in the NHL with something of a throwback style in which they hit everything that moves. But make no mistake about it the Blues play hard but clean. They hammer the opposition with hockey smarts. In fact, as their head coach Craig Berube points out the Blues are the least penalized team in the playoffs.

Bruins Off Their Game

Boston steamrolled into the Stanley Cup Final with tremendous dominance and momentum. However, against the Blues their top players have gone missing in action for long periods of time. St. Louis coach Craig Berube has shut down Boston coach Bruce Cassidy’s top weapons. Cassidy is running out of time to solve Berube’s strategy. It is alarming to see a Boston team that was unstoppable for the first three rounds be rendered so helpless when it matters most.

The pressure is on full blast for both teams here. The Blues don’t want to blow the chance to win their first ever Stanley Cup in front of their long-suffering fans. They also don’t want to have to go back to Boston for a game seven. For Boston they are facing a do or die scenario.