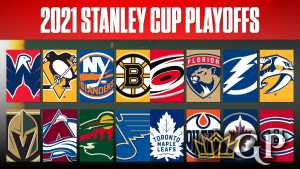 It was a good run with our regular season NHL picks, so now we move onto the Stanley Cup Playoffs. Let’s take an overview look at the NHL Playoffs, the series that look to be worth betting and some other factors to consider as we make NHL best bets.

It was a good run with our regular season NHL picks, so now we move onto the Stanley Cup Playoffs. The 2021 NHL Playoffs begin on Saturday, May 15 with the feature game on NBC matching the Washington Capitals and Boston Bruins. Let’s take an overview look at the NHL Playoffs, the series that look to be worth betting and some other factors to consider as we make NHL best bets.

The East has the Penguins taking on the Islanders and the Capitals playing the Bruins. Both series look to be very even, as there is not much separating these four teams. The Penguins have more offensive firepower with Sidney Crosby leading the way, while the Islanders have the better defense and the better goaltending. For me this series will be decided on how well New York goaltender Semyon Varlamov plays. He is the difference in this series, but there are concerns about his health, as left the last game and he didn’t skate in recent practices. Head coach Barry Trotz says that Varlamov will be fine, but I have my concerns. If the Islanders don’t get great play out of Varlamov then I don’t think they can win this series.

The series between the Bruins and Capitals is another series where goaltending could be the difference. The Bruins are supposed to have the edge in goal with Tuukka Rask, but since when has Rask won anything? I don’t know that I am overly excited about Washington’s duo of Ilya Samsonov and Vitek Vanecek. I think the best choice in this series could be to simply play the games to go over the total.

The Carolina Hurricanes finished first in the division and they are favored against the Nashville Predators. Some analysts are giving the Predators a chance in this series because of goaltender Juuse Saros and perhaps he can be a difference maker, but I see too many holes in Nashville’s game to take them. I don’t trust anyone to consistently score for the Predators and Carolina doesn’t look to have any real weaknesses.

In the other series it will be the battle of Florida as the Panthers play the Lightning. This series is all about health. If the Lightning get an effective Steven Stamkos and Nikita Kucherov then they should prove to be the difference in this series. If both players still look less than 100% then Florida has the edge.

The Maple Leafs are the clear favorite to come out of the North in the Stanley Cup Playoffs. They are clearly a better team than Montreal and I just can’t see any way that Montreal wins this series unless Toronto just decides to completely choke. The series between Winnipeg and Edmonton may not be any better. The Jets have been awful of late and their only edge, goaltender Connor Hellebuyck hasn’t had a great season.  The Oilers have two of the best players in the world in Connor McDavid and Leon Draisaitl. On paper, this series looks like a complete mismatch.

The Avalanche and Golden Knights were still battling for the top spot on Thursday, as each still had a game to play. Colorado wins the tie-breaker and home ice advantage is critical for both teams. Regardless of which team finishes first and which is second, there is no easy first round matchup. The Blues finished in fourth and they know how to win and have a proven playoff goaltender in Jordan Binnington, while the Wild have a ton of young talent and can score with any team in the league, so they will be a tough out.

The two best teams I have seen this season happen to play in the same division. Colorado and Vegas should end up meeting in the second round of the playoffs and I think the winner is the favorite for the Stanley Cup. I think you could take both teams at odds of 4-1 and get a little value.  I also think you could play both teams to win their first round series. Of the other first-round matchups, I think Toronto is the clear choice against Montreal and Edmonton should dispatch of Winnipeg.