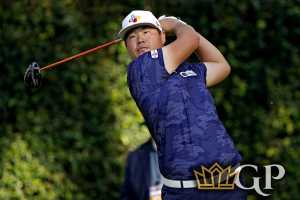 There are two more FedExCup events for this calendar year for PGA Tour players to pick up points, one of which is the RSM Classic. I am coming off a nice 4-1 week with the matchups at the Masters. Let’s look at the matchups and picks for The RSM Classic.

There are just two more FedExCup events for this calendar year for PGA Tour players to pick up points, one of which is this weeks’ RSM Classic. It is not a great field this week since it comes right after the Masters, but there are some good players who have decided to play, including Webb Simpson who is listed as the favorite. I am coming off a nice 4-1 week with the matchups at the Masters. Let’s look at the matchups and picks for The RSM Classic.

It is easy to see why Simpson is favored this week. He has finished second in this event twice in the past and he has seven straight top 20 finishes overall, including a tie for 10th at the Masters. I went against Hatton twice last week and both matchups were winners. I am going against him again this week, as he will be playing this tournament for the first time.

Im just continues to play well and there is no reason to think he won’t play well again this week. He seems to bounce back from everything and I don’t think last week’s tie for 2nd will slow him down.  I know that many people think Fitzpatrick is going to eventually win on the PGA Tour, but I have to see it first. I think he may be better off going back to the European Tour.

We know that Hughes likes this event, as he won his first title in this tournament four years ago. He comes in playing well, as he had a third at Corales and he tied for 7th in Houston. I think he is a solid choice in this matchup against Gooch.

It was a good showing for Pan last week in the Masters, as he tied for 7th. He has played well in this event with two top 15 finishes in three tries.  Snedeker will come up with a good effort once in a while, but he is not a player who consistently contends. I will take Pan in this matchup.

Munoz played well last week with a tie for 19th and he has four top 25 finishes in his last six starts. He played well in this tournament a year ago, as he finished in third place. Niemann has been wildly inconsistent, so who knows what we will get this week. I will take Munoz in this matchup.

Reavie is accurate off the tee and he has a good short game. He played well last week with a tie for 29th at the Masters. Reavie just needs to get his putter going to contend for the win. I will take him in this matchup against Poston.