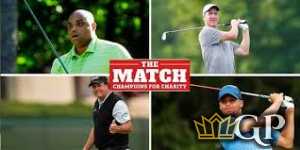 Get ready for a lot of trash talk and some fun golf action on Friday afternoon, as Phil Mickelson and Charles Barkley take on Stephen Curry and Peyton Manning in The Match: Champions for Change on TNT. Let's look at the odds and golf picks.

Get ready for a lot of trash talk and some fun golf action on Friday afternoon, as Phil Mickelson and Charles Barkley take on Stephen Curry and Peyton Manning in The Match: Champions for Change on TNT. The team of Curry and Manning are listed as a -160 favorite over the team of Mickelson and Barkley. Mickelson is the best golfer among the four, but he is teamed up with Barkley who is unquestionably the worst golfer. Curry and Manning are not at the professional level, but each is considered a good golfer, especially Curry who has participated in pro golf events in the past. Let’s look at this match and golf picks.

The Match: Champions for Change Odds

This event will take place at Stone Canyon Golf Club in Oro Valley, Arizona and be televised live on TNT on Friday with a start time of 3 p.m. Eastern. It will be a modified alternate shot match format with all four players hitting tee shots and then the team choosing which ball to play and alternating shots.  Brian Anderson will provide the play-by-play for TNT, while commentators will be Trevor Immelman and Andre Iguodala. The on-course reporters will be Cheyenne Woods and Gary McCord. There will also be special guests on the show, including Eli Manning and Michelle Wie. Eli is expected to be on the course for the Cart Cam live stream.

Curry has said that watching Barkley should be entertaining. “This one’s going to be dope just because, obviously there’s Phil, there’s me, there’s Peyton, and then way down there is Chuck, so he’s going to embarrass himself for sure.” Curry said to the media, “It’s just going to be mad fun to rag on him all day.”

The Match series has taken place twice in the past with Tiger Woods taking on Phil Mickelson.  It was Mickelson winning the first Match in 2018 in Las Vegas, while it was Woods and Manning defeating Mickelson and Tom Brady in the second Match earlier this year.

The Match on Thursday will feature a number of on-course challenges and there will be a minimum of $100,000 on the line for certain holes, while on select holes there could be as much as $2.5 million on the line if a golfer makes a hole-in-one.

The odds on this match favor the team of Curry and Manning and it is easy to see why. Curry and Manning are decent golfers and in the case of Curry, a very good golfer. We know that Mickelson is the best golfer among the four but he will have to carry his team to a victory because Barkley is not any good. The problem for the team of Mickelson and Barkley is that Barkley is going to have to hit every other shot. He is going to continually put his team into bad spots and although Mickelson is great at getting out of trouble, I just can’t see him bailing out Charles on every hole. If it was Manning and Brady playing as a team then perhaps I would give Mickelson and Barkley a chance, but Curry is a really good player. He has played on the Korn Ferry Tour in the past and held his own. He is not a PGA Tour quality player, but he is definitely a good player and he will hit a lot of good shots. Manning has shown in the past that he is a decent player in his own right and he is not going to hurt his team that much. If it was Mickelson vs. Curry then Mickelson would be the clear choice, but it is not. It is Mickelson being dragged down by Barkley against Curry and Manning. I think the odds could drift up near 2-1 before Thursday, so I will take the lay the price and take the team of Curry and Manning to get the win.

Check out the latest odds on The Match: Champions for Change at top online sportsbooks.