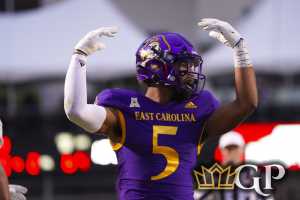 Back-to-back winning weeks with the college football picks; pinch me! The 4-1 ATS showing now moves us to 16-21 ATS through 37 overall selections. Here are my top rated selections for Week 13 and I’m looking to go out with a bang!

No freaking way! Back-to-back winning weeks with the college football picks; pinch me! All kidding aside, last Saturday was a hoot with nearly everything sticking to the plan. Ohio State over their first half total was literally one of the easiest ticket cashes of my life. Sparty never stood a chance! Cincinnati gave us the blowout showing as expected – NO MERCY! Clemson indeed should’ve been favored my more versus Wake Forest’s Swiss cheese defense. Most impressive were the Wyoming Cowboys who put forth their best showing of the season and whipped overrated Utah State to become bowl eligible. I’ll own the Texas Tech call. Oklahoma State dominated every step of the way. Mike Gundy’s got himself a heck of a defense in Stillwater! The 4-1 ATS showing now moves us to 16-21 ATS through 37 overall selections. Here are my top rated selections for Week 13 of the college football betting season and I’m looking to go out with a bang!

Just who will be playing for the Horns that linemakers believe Texas should be the rightful favorite in this matchup? Steve Sarkisian’s program is in turmoil right now. Between injuries, the transfer portal, and assistants being recorded opening up a can on players, this season can’t end soon enough for the Longhorns. It can’t even qualify for a bowl game should it win this game. That’s how bad it’s been in Austin. On the flipside, Chris Kleiman’s Wildcats are already headed to a bowl and would love nothing more than to hand UT one last defeat before bolting the Big 12 for the SEC. I’m pretty surprised this game has been bet in Texas’ favor. Scratch that; I’m shocked! It’s name recognition and name recognition only. K-SUCK outright!

Finally, the selection committee gave Desmond Ridder and company their just due. Luke Fickell’s kids are now the No. 4 ranked team in the land which means they’d participate in the College Football Playoff if it were to start today. But oh man do I absolutely hate this spot in Greenville for the regular season finale. This ECU team is as gritty as they come. It enters this tilt winners of four straight, and is yet to go down in defeat on its own turf in conference all season. Now don’t get me wrong. The Bearcats are far and away the better team in this matchup. While ECU does some nice things, they wouldn’t sniff an outright win against Cincy under normal conditions. But the conditions aren’t normal. This is the second biggest game in program history. The next would come next week in the AAC title game. Win both and they’re in provided everything holds true to form. That’s a big if however. I’m basically paying up to see if the Bearcats can handle the pressure. If they do, great - they deserve it. If not, it’s steak dinners all around!

If you feel the need to lay the points with the Buckeyes, by all means go right ahead. Personally, I’m going to sit back and see if Michigan has it in it to make a game of it early. I believe they will. With that, I’m hoping to get some value live betting the game at reduced prices. Ultimately, I think OSU ends up running away with the win and cover once the clock reads double zeroes. I do however also see the Maize and Blue putting up a fight early on. The Wolverines have some nice, young talent on the roster. It’s too young, dumb and full of you know what to know it doesn’t deserve to play on the same field as the Buckeyes who are my choice to win it all this season. Reality will set in late, but look for Michigan to put points on the board before it does.

Bedlam is going to be insane come Saturday night! Linemakers installing the Cowboys favorites against a rival that’s beat them six straight times is telling in my opinion. OKST’s defense has been insanely good this season. Insanely good! While the Sooners stop unit has improved in recent weeks, it doesn’t hold a candle to what the Cowpokes bring to the table for this matchup. I’m not the biggest fan of Spencer Sanders, but he’s got a pretty solid running game to fall back on should he be unable to make a few plays against OU’s beatable secondary. Oklahoma State is a powder keg waiting to explode. It’s angst from getting owned in this rivalry the last six seasons has reached the boiling point. I foresee OU allowing it to play its game which in turn should see it dominate from the opening kick.

Ready to get weird? The Mountaineers need to win this game to become bowl eligible. This is the Kansas Jayhawks bowl game. I’ve come away unimpressed with the job Neal Brown has done in Morgantown since leaving Troy. I’ve come away very impressed with the job Lance Leipold has done in his less than one year in Lawrence than the five previous coaches that overlooked the program before him. KU has given WVU issues for the last handful of seasons. Though they didn’t win a single one of those games, they went 3-1-1 ATS with the lone loss coming by half a point. I don’t know how and I don’t know why, but the Jayhawks find a way to not only cover this game but win it outright. I feel it; I feel it in my bones - Slam Your Man & Happy Turkey Day!