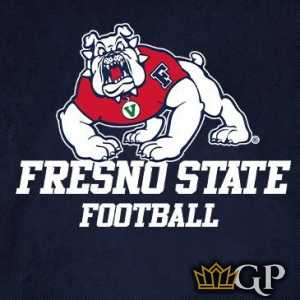 The college football bowl betting season has arrived. There’s a loaded six-game bowl slate set to go down at online sportsbooks on Saturday and I plan on taking full advantage of the offerings. Here are my top rated selections for Saturday.

The college football bowl betting season has arrived. Though the meat and potatoes portion of the schedule doesn’t arrive for a few weeks, it doesn’t mean we can’t attempt to fatten up the bottom line beforehand. There’s a loaded six-game bowl slate set to go down at online sportsbooks on Saturday and I plan on taking full advantage of the offerings. Care to join me? Here are my top rated selections for the first Saturday of the bowl betting season.

After upsetting UCLA and giving the Oregon Ducks all they could ask for up in Eugene, the Fresno State Bulldogs had high hopes of competing for the Mountain West title. Unfortunately it didn’t come to pass with Jake Haener and company dropping a head scratcher to Hawaii on the island and then getting its lunch served up by Boise State. Since the regular season came to a close, head coach Kalen DeBoer bolted for Washington with Haener announcing he would follow. The Bulldogs QB1 has since changed his mind and will be available for this game. UTEP is an old WAC foe of the program. It went 7-5 SU and ATS over the course of the regular season on the back of an above average passing attack and defense that checked many boxes across the board. That being said, Fresno State is the better of these two teams by far and I fully expect it to come out full bore and look to set the tone under the new coaching staff. Lay the points!

It was another fantastic showing for Kalani Sitake and the BYU Cougars in 2021 in winning 10 of 12 played games. So much so that the ‘ol ball coach was locked up in Provo for many years to come! That being said, BYU has been destroyed by the injury bug over the last month. Just about every integral piece to the starting defense is either listed as out or questionable for this tilt against a game bunch of Blazers. UAB’s offense stinks out loud, but its defense should be able to do more than enough to at the very least keep them within an arm’s reach over the game’s entirety. This one won’t be pretty, and because of it I’ll take the points with the ugly dog!

The RAGIN CAJUN’s defense was legit in 2021 limiting opposing offenses to just 345.1 total yards (No. 36) and a paltry 18.3 points per game (No. 11). However, a majority of the coaching staff is now headed to Gainesville to coach the Florida Gators. That includes defensive coordinator Patrick Toney. It’s a messy situation no doubt! And what does ULL stand to gain from defeating a 7-5 Marshall team out of CUSA? The short answer is nothing. Not after going 12-1 with the lone defeat coming in the season opener against Texas. All the motivation is in the Thundering Herd’s corner. That’s an aspect that mustn’t be overlooked come the bowl season. With Grant Wells back under center and Rasheen Ali looking to put on a show in his inaugural bowl appearance, look for Marshall to take advantage and capture the outright win!

Many are of the belief Malik Willis made a poor choice returning for his senior season to lead Hugh Freeze’s offense one last time. I commend the kid for not making it all about himself by abandoning his teammates early. I fully expect his final showing under center for the Flames to be a memorable one. From an Xs and Os standpoint, Liberty couldn’t have asked for a better matchup. Eastern Michigan can’t stop the run to save their lives evidenced by allowing nearly 200 rushing yards per game (No. 113). While it did a decent job limiting mobile QBs, I’ll argue that Willis is a specimen it’s yet to run up against this season. The Eagles also love to pass the football and they’re good at it in averaging an above average 263.6 YPG (No. 33). That being said, Liberty owns the No. 5 ranked pass D in the land! This all adds up to a banner showing from Willis with the Flames comfortably winning by margin in my book. Lay the points!