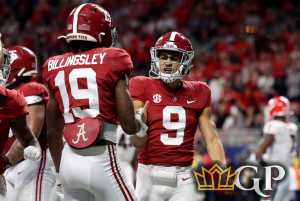 The Alabama Crimson Tide is back in the College Football Playoff as the No. 1 seed looking to defend their title at online sportsbooks. Bama’s only missed out on the festivities once since the CFP made its debut back in 2015. Did anyone really doubt Nick Saban’s ability to get his kids back into the Final Four? And then there’s the Georgia Bulldogs who did everything right save for defeating the Crimson Tide with the SEC title on the line. Did the Dawgs play possum like some suggest in order to get two SEC reps into the CFP? I guess college football bettors will have to wait and find out should each come out on top of its semifinal matchups. A tip of the hat must go in the direction of Luke Fickell and the Cincinnati Bearcats who came oh so close to cracking the Final Four a season ago only to come right back and seal the deal this season. Unfortunately, linemakers don’t forecast it making much noise with it lined substantial underdogs in all three potential matchups. The Michigan Wolverines round it all out after Jim Harbaugh swatted the Ohio State monkey off his back and then pounded the Iowa Hawkeyes into submission in the B1G title game to propel the Maize and Blue into the money round for the first time in program history. As wide open the regular season was with no one true dominant team, the tourney is wide open this season. Buckle your seat belts folks!

The Crimson Tide is currently the biggest favorite of both semifinal CFP betting matchups. It initially hit the board as whopping 16-point favorites with the total lined at 59. The number to beat has fallen three points to -13 while the total is down a half-point to 58.5. CFB bettors look to be of the belief that Cincy finds a way to hang around against an Alabama team whose talent level is light years better than theirs. While the Bearcats undoubtedly have some players on the roster that will be playing on Sundays in the very near future, it’s installed heavy dogs for a reason. Desmond Ridder is a nice player, but he’s no Bryce Young who just so happens to be the decided favorite to win the Heisman Trophy.

But is his offensive line anywhere near as good as it looked in the SEC title game? The regular season’s output didn’t paint a picture as such, so it will be interesting to see how it performs against a defense it’s more unfamiliar with. Cincinnati’s ability or inability to make Young uncomfortable in the pocket will go a long way in deciding this matchup. If it can get constant pressure on him and prevent the running game from taking advantage of the weak link of the Bearcats defense (No. 45), Coby Bryant and the Bearcats No. 2 ranked pass defense should be able to bottle the Crimson Tide passing attack up; especially with the offense without the services of its best pass catcher in the form of John Metchie III who will miss the remainder of the season after tearing his ACL against Georgia. Bama is currently the +124 favorite to win the national championship, while Cincinnati chimes in as a +1300 underdog.

The Dawgs steamrolled their way to the CFP by way of going undefeated in the regular season while covering eight of their 12 played games. Then Kirby Smart ran into his old mentor and got his butt kicked once again. In doing so, Georgia missed out on capturing the No. 1 overall seed and will now have to deal with a confident bunch of Michigan Wolverines hell-bent on winning the whole damn thing in their very first CFP appearance. The CFP betting odds found the Bulldogs initially installed hefty 9-point neutral field favorites and the total set at 43.5. The number to beat is down to -8 with the total up a half-point to 44.5. The latter comes off as pretty surprising considering how dominant both teams were on the defensive side of the ball a majority of the season. The Bulldogs enter this tilt with the No. 2 ranked total and No. 1 ranked scoring defense that allowed just under 255 yards and fewer than 10 points per game. As for Michigan, it ranks No. 12 overall in allowing fewer than 316 yards per game while serving up just over 16 points (No. 4).

With both teams fully versed at getting after the quarterback and forcing turnovers while doing a great job of protecting their possession of the pigskin, don’t look for either offense to take many low percentage chances downfield. A single turnover could ultimately cost either of these teams the game, so I fully expect both coaches to play it close the vest as they feel each other out initially. Once the feeling out process has run its course, there could be some fireworks with both offenses fully capable of going off for some smash plays. Either way, there’s likely to be a little more excitement in the nightcap than in the CFP opener with Saban likely looking to run all game long. As it is, the Bulldogs currently sit just behind the Crimson Tide to win the CFP at +133 while the Wolverines offer up an enticing 6-1 return.