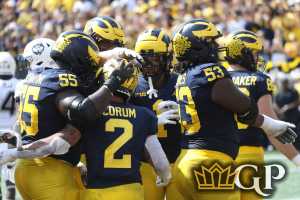 A mea culpa is in order for my picks last week. My five plays went 1-4 ATS, and the win (the Under in the Florida-South Florida game) only cashed by a half-point. That has me in the red this season, so let’s get back in the black with Week 4 CFB picks.

A mea culpa is in order for my picks last week. My five plays went 1-4 ATS, and the lone win (the Under in the Florida-South Florida game) only cashed by a half-point. Houston lost outright as a touchdown-plus favorite over Kansas, Michigan blew the doors off UConn, and Nevada failed to get on the board against Iowa’s staunch defense. That has me in the red this season, so let’s get back in the black.

Boise State at UTEP Under 45.5

This isn’t your father’s Boise State. The Broncos have a pretty respectable defense, but this offense is not good. Boise State currently ranks 20th in Defensive SP+ and 81st in Offensive SP+ after failing to score more than 30 points in a win over FCS UT Martin last week. The Broncos had just 327 total yards of offense, and it’s clear that most of their games this season will be defensive slugfests.

UTEP has one of the worst offenses in the country. The Miners haven’t scored more than 20 points yet in a game this season, and they are ranked 125th in Offensive SP+. It’s very likely that Boise State holds UTEP to 13 points or less, making the Under a nice play given the college football betting odds here.

There is some buzz with Maryland after the Terrapins started the season 3-0, but this team tends to fall apart in Big Ten play, and that’s especially the case when they face Michigan. The Wolverines have defeated the Terrapins by an average of 33.7 PPG in each of their last six games, and their smallest margin of victory in that stretch was a 21-point win.

Michigan has proven to be a buzzsaw this year as J.J. McCarthy has this offense humming. The Wolverines are ranked sixth in Offensive SP+, and they shouldn’t have a problem moving the ball even though Cade McNamara is on the sidelines. Maryland is ranked 56th in Defensive SP+, but the Terps are allowing 273.7 YPG through the air, and the front seven is unlikely to affect the game against a staunch Michigan offensive line.

People are jumping off the Kansas State bandwagon after their listless performance in a 17-10 loss to Tulane last week. However, the Wildcats have hung close with Oklahoma in each of the last three years, and Kansas State defeated Oklahoma in 2019 and 2020. Previously, these games were pretty high scoring, but there shouldn’t be as many fireworks with Brent Venables now coaching the Sooners.

Kansas State is ranked 13th in Defensive SP+, and this defense could have a lot of success against an offense that has shown some cracks in Oklahoma. Dillon Gabriel isn’t as explosive as Caleb Williams, and this is by far the toughest opponent he has faced this season.

Clemson at Wake Forest Under 56.5

The Tigers have won 13 straight over the Demon Deacons, and the vast majority of these games have been blowouts. They have won 10 consecutive games by 14 points or more, so you may be scratching your head when it comes to why the college football betting odds have only made Clemson a seven-point favorite on Saturday.

For the second straight season, Clemson’s offense isn’t what it was under Deshaun Watson or Trevor Lawrence. D.J. Uiagalelei isn’t the answer, so it’s hard to count on the Tigers to score a lot of points. However, this defensive front led by Myles Murphy and Bryan Bresee has been incredible. Clemson should blow up Wake Forest’s mesh offense at the point of attack, rendering it ineffective. That makes the Under a great bet on Saturday afternoon.

The Golden Hurricane had a lot of luck in their blowout win over Jacksonville State last week. The Gamecocks turned the ball over three times and gifted Tulsa 10+ points on defensive and special teams miscues. Tulsa ranks 79th in Defense SP+ and gave up 40 points to Wyoming and 35 points to Northern Illinois, so Lane Kiffin can name the score in this one. Kiffin has run up the score in Ole Miss’ last two wins, beating Georgia Tech and Central Arkansas by a combined margin of 101-3, and we are likely to see more of the same here.