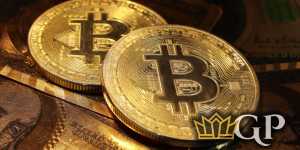 The price of Bitcoin continues to go higher, as it surged past $5,500 for the first time in five months.

The price of Bitcoin continues to go higher, as it surged past $5,500 for the first time in five months. The price spiked to $5,650 on Tuesday before falling back a little bit. The price is the highest for the cryptocurrency since November of last year and continues the upward movement for Bitcoin in recent months. The dominance of Bitcoin against other cryptocurrencies also continues, as Bitcoin has over 50% of the cryptocurrency market.
Bitcoin Pulling up All Cryptocurrencies
When Bitcoin does well, other cryptocurrencies also do well. That was the case with the latest surge, as nine of the top ten cryptocurrencies had gains above two percent in early Tuesday trading. While the news was positive for almost all cryptocurrencies, some perspective is still in order. The current market is at about $184 billion but that is nowhere near what the market was in January of 2018 when it hit an all-time high of $835 billion. Bitcoin has definitely led a rebound in cryptocurrencies of late, but it should be noted that Bitcoin has surged higher in terms of percentage than most of the other cryptocurrencies. Some investors have even said that they are pulling out of many other cryptocurrencies and focusing exclusively on Bitcoin. It has taken some time for Bitcoin to get past the $5,000 mark, but it may not take long for the $6,000 mark to get broken.
Bitcoin Golden Cross
Many investors want to see continued price increases before they really commit to putting in more money into the cryptocurrency. The golden cross may be what people have been waiting for. It is when the 50-day moving average crosses above the longer-term 200-day moving average. It doesnt happen that often, but it happened on Tuesday. The 50-day moving average was $4,489 while the 200-day was at $4,478. "The technical picture for [bitcoin] is looking increasingly bullish on the daily charts with the fabled bullish â€˜golden crossâ€™ slowly coming into play," said research analyst Lukman Otunuga to the media.
DailyFX said that more than 80% of its retail traders are now taking a long term position on Bitcoin. They also said that some of their traders are also bullish on some altcoins such as XRP and Litecoin.
It should be noted that some analysts are looking beyond the Golden Cross for their position on Bitcoin. "Bitcoinâ€™s price is up almost 50% since the start of 2019. Instead of obsessing over the volatile price movements, it is important to stay focused on the underlying fundamentals of the transaction settlement network," said Morgan Creek Digital founder Anthony Pompliano to the media. "Those that have the patience and discipline to stick around will be rewarded handsomely."
While the news is definitely positive for Bitcoin, it should be remembered that Bitcoin is still down a lot since its high of about $20,000 late in 2017. The Wall Street Journal reported on Tuesday that SoftBank founder Masayoshi Son lost $130 million when he invested in Bitcoin late in 2017. It is all a matter of timing for those looking to buy Bitcoin. Anyone who bought Bitcoin late in 2017 lost a lot of money, but those people who bought Bitcoin earlier this year have done well, as Bitcoin has risen in price every month in 2019.
One thing we do know about Bitcoin is that it continues to attract attention from investors and businesses around the world. It seems that every day another major company announces they are adding Bitcoin payment options for their customers. Some companies are already ahead of the curve including some major names like Microsoft and Starbucks. Leading online sportsbook BookMaker was one of the first online sportsbooks to incorporate Bitcoin into their payment options and now most of the customers at BookMaker use Bitcoin for their deposits and withdrawals.
Facebook
Twitter
E-Mail
We provide the most accurate and reliable sports betting information all in one spot. Whether you are looking for a place to bet or just need the news to help you decide your next pick, Gamblers Palace will point you in the right direction with daily sports news, player status and updates as well as sportsbook ratings and recommendations.