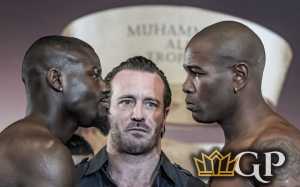 Yunier Dorticos goes against Andrew Tabiti on Saturday, June 15, 2019 in a World Boxing Super Series cruiserweight semifinal fight that can be seen on DAZN. Dorticos is 23-1 in his career with 21 knockouts, while Tabiti is 17-0 with 13 knockouts.

Yunier Dorticos goes against Andrew Tabiti on Saturday, June 15, 2019 in a World Boxing Super Series cruiserweight semifinal fight that can be seen on DAZN. Dorticos is 23-1 in his career with 21 knockouts, while Tabiti is 17-0 with 13 knockouts. Dorticos is coming off a win against Mateusz Masternak in the WBSS quarterfinals, while Tabiti is coming off a win against Ruslan Fayfer in the WBSS quarterfinals. The winner of this fight will take on the winner of Mairis Briedis vs. Krzysztof Glowacki for the Ali Trophy in the cruiserweight edition of the World Boxing Let’s look at this fight and boxing picks.

In his last five fights, Dorticos is 4-1. He is coming off a unanimous decision win against Mateusz Masternak in October of last year. He lost to Murat Gassiev in February of last year. He knocked out Dmitry Kudryashov in September of 2017, won by TKO against Youri Kayembre in May of 2016 and he won by TKO against Fulgencio Zuniga in December of 2015.

Dorticos said to the media that he will get the win against Tabiti. “I respect any man who gets in a ring but Tabiti is in my way to the final and I will eliminate him at all cost.”

Tabiti said that he has respect for Dorticos, but he is confident he can win. “I have got to have respect for a fighter like him that is why I stepped up my training. I am training harder and training longer. “Tabiti said to the media, “I am definitely not overlooking him, but I am confident I can beat him.”

Tabiti is unbeaten in his career, yet he is listed as more than a 2-1 underdog in this fight against Dorticos. I think that tells us a lot, as oddsmakers don’t believe that Tabiti has the skills to beat a fighter like Dorticos. Tabiti does have 13 knockouts, but his level of competition simply hasn’t been very good. Dorticos has more experience and has fought a little bit better competition, and he should have the advantage in this bout. It is never appealing to lay more than 2-1 on any fighter, but I would lean to Dorticos in this fight. Since the price is a little higher than I prefer, I think the rounds option will be a better choice. Dorticos has knocked out almost all of his opponents and there is no reason to think that anything will be different in this fight. Tabiti figures to go right at Dorticos and we should get an early knockout. I will gounder the rounds total for this fight.