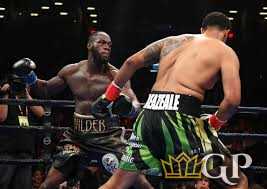 Deontay Wilder goes up against Dominic Breazeale on Saturday, May 18, 2019, with Wilder defending his WBC heavyweight title. Wilder is 40-0-1 in his career, while Breazeale is 20-1.

Deontay Wilder goes up against Dominic Breazeale on Saturday, May 18, 2019, with Wilder defending his WBC heavyweight title. Wilder is 40-0-1 in his career, while Breazeale is 20-1. Wilder is listed as a big favorite in this bout, with the rounds total at 9.5. It should be an exciting fight for as long as it lasts, as both fighters have expressed an extreme dislike for the other. Let’s look at the fight that can be seen on Showtime and boxing picks.

In his last five fights, Wilder has four wins and one draw. He fought to a draw against Tyson Fury in December of last year. He defeated Luis Ortiz by 10th round TKO in March of 2018, Bermane Stiverne by 1st round knockout in November of 2017, Gerald Washington by 5th round TKO in February of 2017 and Chris Arreola by 8th round RTD in July of 2016. Wilder has knocked out all but two of his opponents.

There is no question that Wilder and Breazeale have a huge dislike for one another. Both fighters are taking this fight personally and Wilder has said that he is going to destroy Breazeale. “When I take a fight personal, something magical is going to happen,” Wilder said to the media, “I’ve been up at 2:00 AM, hitting the heavy bag for 12 rounds straight. And still breathing smoothly. This is going to be a disaster for Breazeale. Enjoy this one, because it’s going to be a massacre. May 18 will be a beautiful day for me. A beautiful day to see what I’m planning to do for the sport of boxing.”

In his last five fights, Breazele has four wins and one loss. He knocked out Carlos Negron in the 9th round in December of last year. He defeated Eric Molina by RTD in the 8th round in November of 2017, Izu Ugonoh by 5th round knockout in February of 2017 and Amir Mansour by 5th round RTD in January of 2016. His only loss came against Anthony Joshua by 7th round TKO in June of 2016. Breazeale has knocked out 18 of his 20 opponents.

Breazeale and Wilder were involved in an incident in February of 2017 at a hotel in Alabama after both fought different fighters. Breazeale said he was attacked in front of his wife by those in Wilder’s group. "I can't wait to get my hands on him. What he did in Alabama in front of my family, I can never forgive him for nor will I ever forget," said Breazeale to the media, "Even after the incident in Alabama, he continued to bring my sons into it. I intend to make him pay come May 18th and shut him up once and for all. "

It is always interesting when a fight has some build up to it and the fighters hate one another. That is definitely the case with this fight and it should spice things up on fight night. The motivation for Breazeale is also worth looking at, as he will be going hard and fast at Wilder in this one. We give the underdog at least a puncher’s chance to win this fight. The problem with backing Breazeale is that Wilder has a ton of power and getting into a brawl with him is going to result in a knockout. Perhaps that is not a bad strategy, because Breazeale is not going to win a decision against Wilder and he doesn’t have enough power to constantly trade bit shots. What he needs to do is get lucky and land a big shot. Is it likely? No. Is it at least possible; Yes. The best choice based on these two fighters is to simply take the rounds to go under the total of 9.5, as it is hard to envision anything other than a knockout win in this fight.