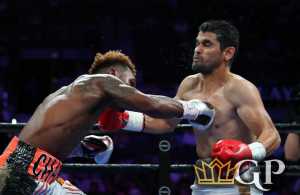 Charlo is coming off a unanimous decision loss to Tony Harrison in December, while Cota was beaten by split decision in April by Jeison Rosario. Let’s look at this fight that takes place in Las Vegas and boxing picks.

Charlo is coming off a unanimous decision loss to Tony Harrison in December, while Cota was beaten by split decision in April by Jeison Rosario. Let’s look at this fight that takes place in Las Vegas and boxing picks.

In his last five fights, Charlo is 4-1. He suffered the first loss of his career, as he was beaten by Tony Harrison in December of last year. He lost the WBC light middleweight title in that bout. Charlo previously won the title by defeating John Jackson in May of 2016 and Charlo successfully defended the title by beating Charles Hatley in April of 2017 by 6th round knockout, Erickson Lubin by first round knockout in October of 2017 and Charlo won a majority decision against Austin Trout in June of 2018.

Charlo said he is disappointed not to be facing Harrison for the rematch. “It feels like a heartbreak,” said Charlo to the media, “I always pray for my opponent to have safe care and make it to the fight healthy. It’s unfortunate that Tony Harrison isn’t my next victim. I want the best Harrison so I want him healed up and ready to go, because that will only bring out the best in me. I feel my title was taken from me and being held hostage and I want it back. I will go through anything to get it back. The moment he’s cleared to fight I want the match and I will get my title back. I know I can’t leave it to the judges anymore.”

Tom Brown, President of TGB Promotions said that Charlo can’t take this fight lightly. “Jorge Cota is a dangerous fighter. He has heavy hands and he’s looking for an opportunity to make a statement,” Brown said to the media, “Jermell Charlo realizes just how serious this is and he wants to get his title back. I know he’s going to be prepared to make his own statement.”

In his last five fights, Cota is 3-2. He is coming off a split decision loss to Jeison Rosario in April. He defeated Euri Gonzalez by TKO in November of last year, knocked out Roberto Valdez in October of 2017, won by TKO against Fidel Damian Lopez in September of 2017 and lost to Erickson Lubin by TKO in March of 2017.

Cota said he is motivated to do what Andy Ruiz did in his fight against Anthony Joshua. “Watching my Mexican brother Andy Ruiz fight last weekend, I am very motivated,” said Cota to the media, “I saw how he got an unexpected chance to become a champion and surprise the world. He has inspired me to win this fight in the same way. I will shock the world on June 23 just like Andy did on Saturday, for Mexico, the country that I love. This is the most important fight of my career.”

How motivated will Charlo be for this fight, as it is not a title bout? We know that Cota will be motivated and that should mean some early fireworks. I am definitely not laying the price on Charlo, although he will probably get the win. I think the better choice is to play the rounds to go under the total.