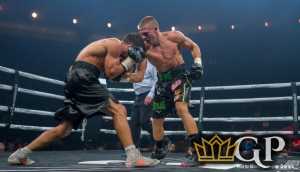 Current champion Ivan Baranchyk will be going against challenger Josh Taylor for the IBF Light Welterweight Title on Saturday, May 18, 2019 at SSE Hydro in Glasgow, Scotland in a fight that can be seen on DAZN.

Baranchyk’s record is 19-0, while Taylor’s record is 14-0. The odds have Taylor listed as a big favorite in this bout.

Regis Prograis, ranked number one in the super lightweight division said this to boxingscene.com about the bout between Baranchyk and Taylor, “I think it’s a real good fight and it’s a 50-50 fight. I actually lean more towards Josh Taylor because he’s more of a complete boxer. But Baranchyk is tough, he’s strong, he’s gonna keep coming forward and he has a big punch. Josh Taylor, if he hits him clean, he has a possibility to hurt him and maybe get him out of there. So, I don’t know. But if Baranchyk hit him, I don’t know what’s going to happen. But I still think it’s gonna be a close fight and I still lean towards Taylor a little more.”

Taylor said this to heraldscotland.com about his upcoming bout against Baranchyk, “I think Baranchyk’s only chance is to come forward and have a go from the get go, the first bell. He is going to come out swinging totry to get me to come out and have a fight on his terms. But I am smart enough and I believe I can outfight him anyway. And if he tries to box me I don’t think he has any chance of out boxing me.”

Taylor also said this to The National, “Baranchyk having Freddie Roach in his corner doesn’t bother me. I think he has too many fighters to be concentrating on one fighter at a time. He hasn’t been able to give Baranchyk enough time, the kind of time it would need to beat a fighter like myself. How well does he really know Baranchyk? How well does he know he works? I’m not bothered; I really am not fazed at all. I don’t think it will have any bearing on the fight. Eight weeks with a new trainer for your first defense against a fighter like myself, I don’t think it is a great move.”

Both Baranchyk and Taylor are undefeated and have the same of number knockout wins. Taylor is one of the top boxers in the world in the super lightweight division second only to Prograis. Taylor gets a knockout win 86% of the time and has the smarts and skill to outthink Baranchyk. On the other side, Baranchyk gets a knockout win 63% of the time and would be hard pressed to get a knockout win in this fight. If Baranchyk was quick on his feet and fast with his punches, he might catch Taylor, but that seems unlikely. Baranchyk will probably make this fight a little competitive for Taylor but it is unlikely that he will be able to get the win. I will take Taylor to get the win and the rounds to go over.

Boxing Pick: Josh Taylor, and the rounds to go over the total.