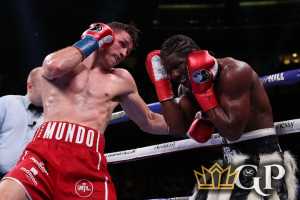 Callum Smith takes on Hassan N’Dam on Saturday, June 1, 2019 in a super middleweight title fight on DAZN. Smith is 25-0 with 18 knockouts, while N’Dam is 37-3 with 21 knockouts. Smith will be defending his WBA and WBC titles in this bout that takes place at Madison Square Garden in New York on the undercard of Anthony Joshua vs. Andy Ruiz Jr. Let’s look at the bout and boxing picks.

In his last five fights, Smith has five wins and no losses. He won the WBA and Ring super middleweight titles last December when he knocked out George Groves in the seventh round. Smith beat Nieky Holzken by unanimous decision in February of last year, won a unanimous decision against Erik Skoglund in September of 2017, knocked out Luke Blackledge in the 10th round in December of 2016 and won an RTD in the 6th round against Norbert Nemesapati in September of 2016.

In his last five fights, N’Dam is 4-1. He won a majority decision in December against Martin Murray, he was beaten by RTD in the 7th round by Ryota Murata in October of 2017, he defeated Murata by split decision in May of 2017, he knocked out Alfonso Blanco in December of 2016 and he won a TKO against Tomasz Gargula in July of 2016.

Smith and N’Dam know each other pretty well, as they are former sparring partners. "I had him over in England to help me prepare for George Groves, so we know each other well.” Smith said to the media, “He's a good mover, has good footwork and can move around the ring pretty well. Experience is on his side and he's an awkward guy to face. Saying that, he's definitely a fighter that I should beat and get rid of if I'm on my game."

N'Dam was in consideration to face Gennady Golovkin, but that fight went to Steve Rolls, so N’Dam took this opportunity and said to the media, "I am so pleased and proud for this opportunity to be offered to me and I would like to add that even though the challenge is a big one, this does not affect my focus and my determination. Callum Smith is an excellent boxer with many qualities as he is tall, he can impose his own boxing style on most of his opponents. I have much respect for him both as a boxer and a person. I believe it will be a very tactical fight. I have the experience of boxing on big shows as I have participated in many and in front of thousands of people. I have always defended my titles abroad and I am used to pressure, and know how to handle it."

There won’t be many secrets between Smith and N’Dam since they have sparred against one another, so this fight could be more competitive than the odds suggest. Smith is unbeaten, and he will probably win this fight, but I don’t know that he should be a 30-1 favorite. Those are the type of odds you see on a fighter that simply can’t lose going against a fighter with no chance. N’Dam is a capable fighter and he can at least cause Smith some problems.

There is no way I would lay this type of price on any fighter. Smith will probably win, but N’Dam is a good fighter who should make this fight somewhat competitive. Since I am not laying the big price, I will look for a fight in which both fighters have a good idea of what the other is going to do and one that could go the distance. I will go over the rounds total in this bout.

Boxing Pick: Over the Rounds Total