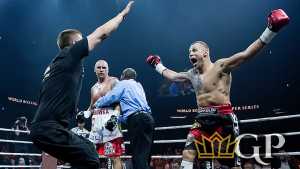 Krzysztof Glowacki is going up against favored Mairis Briedis in the WBSS Semifinals on Saturday, June 15, 2019 at Arena Riga at Riga, Latvia in a fight that can be seen on DAZN.

Briedis said this to boxingscene.com about his upcoming bout against Glowacki, “He is a very good boxer with a very heavy punch. The WBC title is an additional weight on my shoulders but at the same time it gives even more motivation for the fight. I am really looking forward to returning to the WBC Champions family!”

Glowacki said this to boxingnews24.com about his upcoming bout, “Briedis is a great, strong and skilled boxer, but he didn’t impress me too much in his last two fights. He was much better against Usyk or Huck. I first met Mairis in 2010 – he trained in our gym in Warsaw and he even had a fight on our event. He’s a nice guy and a world-class fighter. Mairis, prepare for war, Glowka is coming. I’m going to win the Ali Trophy!” Everybody who watched my fights knows I always fight hard from the first to the final bell. Even if I’m down on the scorecards like against Huck I still believe in myself and never give up. ‘It’s worth believing’ – this is my motto!”

These two fighters have just one loss each and both are ranked in the top five in the cruiserweight division. Both fighters have decent power, but neither one has overwhelming knockout numbers. There is no questionthat the value in this fight is on Glowacki, but it is hard to get too excited about taking a fighter who has fought very little top competition. Breidis has also not fought a ton of great fighters in his career, but he is getting a lot of respect from the oddsmakers. I lean a little bit to Bredis in this fight, but I don’t like laying nearly 3-1. I think there should be more value on the rounds total. While these two fighters have combined for 37 knockouts, both fighters seem to realize that they can’t take any chances in this fight and turn it into a slugfest. I expect that both fighters will be fighting a defensive style and that should result in a longer fight that goes over the rounds total.

Boxing Pick: Mairis Briedis to get the win by unanimous decision