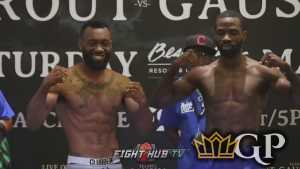 Austin Trout takes on Terrell Gausha on Saturday, May 25, 2019 in a junior middleweight fight on FS1. Trout is 31-5 with 17 knockouts, while Gausha is 21-1 with 10 knockouts. Trout has not fought in almost a year, but he could end up as the favorite in this fight, as Gausha doesn’t have as much experience and has not fought that many top fighters. Let’s look at the bout and boxing picks.

In his last five fights, Trout has two wins and three losses. He lost a majority decision to Jermell Charlo in June of last year, he won a unanimous decision against Juan De Angel in February of last year, he was beaten by Jarrett Hurd by RTD in round 10 in October of 2017, he lost a unanimous decision to Jermall Charlo in May of 2016 and he knocked out Joey Hernandez in September of 2015.

There used to be a time when Austin Trout was a top attraction, but those days are gone. He is only 33 years old, but he hasn’t beaten anyone of note in a long time. He did fight Canelo Alvarez in 2013 and it was decent effort, but he didn’t look good in a loss to Erislandy Lara and he couldn’t beat Hurd or the Charlo twins.

The question now is whether or not Trout is a different fighter under conditioning coach Rob Garcia and trainer Floyd Mayweather Sr. Garcia said that he believes Trout can go on a big run. “I think when (Gennadiy Golovkin) went on his run he was about 32 or 33. So (Austin) was available; he’s coming off a few losses, so he’s looking to change things up.” Garcia said to the media, “I think you’re going to see a great offense, you’re going to see a clever, crafty Austin Trout, and you’re going to see a definite elevation in his punching power because that’s my expertise -- being able to generate an amount of force you’re going to need if you want to be a dynamic puncher.”

Trout said he is not concerned about Gausha. “He’s got a good name, good record, good background, he’s gonna make me look really good,” Trout said to the media,“He’s stronger than his knockout percentage says, he’s determined. Other than that, I’m not really worried about him. He’s not a bum by any means, but I’m really feeling myself so I’m not concerned about anything he’s going to bring to the table. Because I’ve seen it all. I’ve been there, I’ve done it.”

Gausha said to the media that he needs this win to get some recognition. “With Austin Trout being a former champion and having experience fighting all the top guys in the division, it gives me a chance to show where I’m at. It’s not only about winning, but it’s the way I’ll win that will put people on notice.”

Who knows what we are going to get out of Trout, as he hasn’t fought in more than a year, but there is no reason to get excited about taking Gausha. This has all the looks of a fight where bother fighters feel each other out and just try to avoid getting hit with big shots. I will go over the rounds total in a fight that should go the distance.

Boxing Pick: Over the Rounds Total