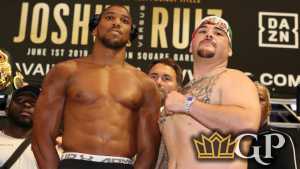 Challenger Andy Ruiz Jr. will be going up against heavily favored current champion Anthony Joshua for the WBA, IBF, WBO, and IBO Heavyweight Titles on Saturday, June 1, 2019 at Madison Square Garden in a fight that can be seen on DAZN.

Challenger Andy Ruiz Jr. will be going up against heavily favored current champion Anthony Joshua for the WBA, IBF, WBO, and IBO Heavyweight Titles on Saturday, June 1, 2019 at Madison Square Garden in New York City, New York in a fight that can be seen on DAZN. Joshua’s record is 22-0; while Ruiz Jr.’s record is 32-1. Let’s look at the bout and boxing picks.

In his last five fights, Joshua has five wins and no losses. He defeated Éric Molina by TKO in the third round, Wladimir Klitschko by TKO in the 11th round, Carlos Takam by TKO in the 10th round, Joseph Parker by unanimous decision, and Alexander Povetkin by TKO in the seventh round. Joshua gets a knockout win 95% of the time.

Joshua said this to sportingnews.com about his upcoming bout against Ruiz Jr. "He's keen, he's game, and you cannot knock him. He can fight, and he's got hands. He gave a world champion in Joseph Parker lots of problems... Andy is championship level for sure, and I have not underestimated him one bit.”

In his last five fights, Ruiz Jr. has four wins and one loss. He defeated Franklin Lawrence by unanimous decision, Devin Vargas by KO in the first round, Kevin Johnson by unanimous decision, and Alexander Dimitrenko by corner retirement in the fifth round; while losing to Joseph Parker by majority decision on December 10, 2016 at Vector Arena in Auckland, New Zealand. Ruiz Jr. gets a knockout win 64% of the time.

Ruiz Jr. said this to bbc.com about his upcoming bout against Joshua, “My whole life people underrated me so I'm going in there to take all. I'm not going in there scared and I'm not going in there nervous, I'm going to go in there mad and to take what's mine. There's nervousness in me, but they're happy nerves. This is my chance to make history. I think the fight is going toe-to-toe, two guys smashing each other's faces. I'm going in there to throw combinations like I've never done before, to improve my speed. I think being so tall he fights like a big robot. I think with my style, my speed, my movement, I don't think he's fought anybody like me. It's going to be a whole different ball game. I'm going to bring the pressure, the speed, and the combinations to him. When I do pull out this win, everything is going to change. I'm going to bring the titles back to Mexico; it's going to mean everything. I'm going to be able to change my whole family's lives; my life and all my kids.”

Joshua is heavily favored in this fight and for good reason, as he has shown no weaknesses so far in his career. Ruiz is a fast boxer with powerful hands and durable on his feet, so he could make this interesting for a little while. The problem for Ruiz is that his strategy appears to be going toe-to-toe with Joshua and trading bit shots. Ruiz said he is going to pressure and go right at Joshua. Good luck with that. Joshua has knocked out 21 of his 22 opponents and there is no reason to think he won’t finish off Ruiz. The price on Joshua is too high for me, but if there are some individual round props they might be worth looking at and the rounds are worth considering. With both fighters trading big shots I expect this one to end early, with Joshua getting the knockout and the fight to go under the rounds total of 6.5.

Boxing Pick: Anthony Joshua by knockout in the third round and also the rounds to go under the total.