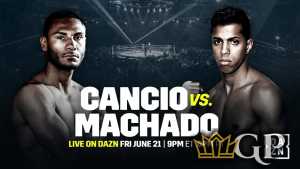 Current champion Andrew Cancio will be going up against challenger Alberto Machado for the WBA Super Featherweight Title on Friday, June 21, 2019 at Fantasy Springs Resort Casino in Indio, California in a fight that can be seen on DAZN.

In his last five fights, Cancio has four wins and one loss. He defeated Hugo Cazares by KO in the third round, Aidar Sharibayev by TKO in the 10th round, Dardan Zenunaj by unanimous decision, and Alberto Machado by KO in the fourth round; while losing to Joseph Diaz by TKO in the ninth round on September 17, 2016 at AT&T Stadium in Arlington, Texas. Cancio gets a knockout win 58% of the time.

Cancio said this to worldboxingnews.net about his upcoming bout, “For a lot of people it was a surprise that I beat him, but for me, like I said before coming into the fight, I knew what I was going to do. The way the training camp went I was barely starting to get my rhythm. It’s the first time I’ve been active in a while, back to back to back camps. My body is responding a lot quicker than usual. My timing is even better.”

Cancio went on to say that he doesn’t expect anything to be different this time around against Machado. “This next fight I don’t see anything differently. I feel like we’ve gotten stronger and quicker. It still bothers me when they use the weight issue as a reason he got beat up. I don’t expect anything different for this fight. I think he just went up against a guy that can get hit, get knocked down, and come back to fight even harder. I told people he’d never been in the ring with a fighter like me. He was finally in there with somebody who is going to be in there tough and is going to fight toe-to-toe with him. Leading up to the last fight, he said he had a good camp. We didn’t hear any excuses until after he lost. We’re going to jump on him from the start. He better be ready. Round one is going to be like round five for me. I’m going to jump right on him. I know what I have to do to prevent him from being dangerous.”

Machado said this to ringnews24.com about his upcoming bout, “I feel well. All this has been a process of coming back, so I feel very motivated from being a prospect to becoming world champion, now to go beyond that now with the possibility of becoming a two-time world champion. All of that has me very motivated. I work with that in mind for this fight.”

Both Cancio and Machado will be facing each other for a second time and it will definitely be a revenge rematch for Machado who lost to Cancio in February of this year. The value in this fight will be on Machado, but the question is why things will be different in this rematch. Cancio knocked out Machado the last time and there is a good chance he does it again. I will go with Cancio and the rounds to go under.

Boxing Pick: Cancio to get the win by knockout in the second round and also for the rounds to go under the total.

Bet on Boxing Odds at the Online Sportsbook