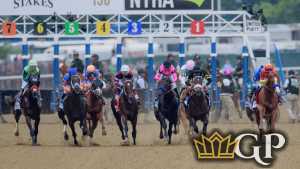 Weekend Sports Betting Schedule for the weekend of June 20-21. Sports betting odds at the online sportsbook.

It’s gotten to the point that there might not be a 2020 MLB betting season, and it’s sad. The MLBPA and MLB commissioner Rob Manfred simply can’t come to an agreement. Whether it be prorated salaries or the amount of games in the season, the two sides are at an impasse and a deal between the two sides doesn’t look to be on the horizon. There is still time however, so hopefully some form of an agreement is struck over the next week so the “Boys of Summer” can return to a ball park near you relatively soon. Things still look to be on course for the NBA which is set to return July 30, and the target date for NHL training camp to begin is still July 10. While that news brings a smile to the face of sports bettors around the world, it quickly turns into a frown after listening to what the world’s leading coronavirus expert had to say about football being played this season. He believes the NFL will need to be played in a bubble with COVID-19 testing being done every day to prevent any sort of outbreak within each respective franchise. That’s the last thing sports fans wanted to hear. If there’s no NFL games being played come September, the world will get even scarier than it already is. On that note, here’s a look at what’s going down at online sportsbooks through the weekend of June 20-21.

This weekend is all about horse racing, as the first race in the Triple Crown takes place on Saturday on NBC. It will be the first time in history that the Belmont is the first race in the Triple Crown and the race will be run at a shorter distance. Tiz the Law is the morning line favorite and based on the quality of the field, the horse should win. Tap It to Win looks to be the main challenger, and those two horses could end up battling for the win on Saturday. Belmont betting odds are available at top online sportsbooks.

The weekend soccer bettors have been waiting for is finally here! Back in action will be the English Premiere League, German Bundesliga, Italian Serie A and Spain La Liga. The EPL offers up a seven pack of games set to go on Saturday and Sunday with league-leader Liverpool closing the weekend’s action out on Sunday versus Everton with the Reds installed -172 chalk to come out victorious. Fresh off mathematically winning their eighth straight tile, Bayern Munich kicks off a loaded nine fixture day on Saturday versus Freiburg in a match their -417 favorites to come out on top of. A quadrant of match ups are locked in for both Saturday and Sunday in Serie A play, while La Liga closes its return to the pitch out Saturday with four bouts as well.

NASCAR bettors were forced to wait a week for the next race with nothing held in the middle of the week for the first time since the end of May. Denny Hamlin +1100 will attempt to rattle off successive triumphs in Talladega on Sunday after coming out victorious in the Dixie Vodka 400 last time out. He already took the Toyota 500 back on May 20, so he’ll no doubt be getting some attention from NASCAR bettors with the GEICO 500 set to go off at 3 p.m. ET on FOX. He does however sit behind Ryan Blaney +600, Joey Logano +800, Chase Elliott +900 and Brad Keselowski +950 on the races’ current futures odds.

Another loaded MMA card is set to play out on Saturday night in Sin City from the UFC APEX. Headlining the night’s festivities will be the heavyweight matchup between Alexander Volkov and Curtis Blaydes with the latter lined the -430 favorite to handily win the bout. Heavy juice is on the under 2.5 rounds as well, so MMA bettors aren’t expecting Volkov to put up much of a fight. Other notable matchups include Marion Reneau vs. Raquel Pennington -175, Josh Emmett vs. Shane Burgos -146, Roxanne Modafferi vs. Lauren Murphy -105 and Lyman Good vs. Belal Muhammad -130. Take all the action in live on ESPN+ at 8 p.m. ET.

The KBO will have a total of 10 games going over the weekend with five going each day. The laughable series between the league leading NC and Hanwha will continue, while the more intriguing matchup between Doosan and LG will also play out. If wanting more than the KBO you’re in luck! The Japanese Nippon Professional Baseball League had its Opening Day on Friday and will continue play through the weekend. The 12-team league is set to begin its shortened 120-game schedule, and futures odds for the league winner finds the Fukuoka SoftBank Hawks installed the +225 favorites to be the last team standing.

E-Soccer and Hockey will offer up large slates through the weekend. DOTA 2, League of Legends and Overwatch already have odds for matches slated to go Saturday on the board. Wager and watch it all go down live right from Bookmaker’s backend!

The Madden20 “Upside Down Seed” tournament begins Round 2 play on Saturday with a loaded 6-game card. Matchups include Browns/Cardinals (+2.5, 38.5), Eagles/Chargers (-1, 40), Ravens/Broncos (+6.5, 40), Chiefs/Buccaneers (PK, 44), Packers/Steelers (+5.5, 40) and Saints/Rams (+2.5, 43.5). With Madden 20 champ Dallas no longer in the picture, New Orleans is now the +426 favorite to win the tournament followed by the Chargers +526, Ravens and Packers +702, Vikings +8-2 and 49ers and Chiefs +852. Playoff series and exhibition matchups are slated for NBA2K20, MLB The Show 20 and NHL20 EA Sports through the weekend, but all eyes will be on another installment of UFC EA Sports 3 set to go down Sunday night! The 7-play card has some impressive names on it like Anderson Silva, Urijah Faber, Georges St.-Pierre, Nick Diaz, Chuck Lidell, Vitor Belfort and Wanderlei Silva. Don’t miss it! Each and every one of these sport sims can be watched and wagered upon live on their respective family of streams at @PrimeTimeAction on Twitch.TV.