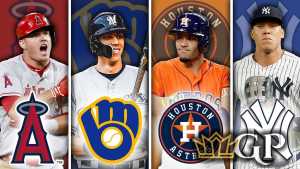 Weekend Sports Betting Schedule for the weekend of July 25-26. Sports betting odds at the online sportsbook.

Though Juan Soto tested positive for the coronavirus and Clayton Kershaw hit the IL hours before his scheduled start against the San Francisco Giants, the 2020 MLB betting season kicked off on Thursday with a full slate following it on Friday. Though three of the four majors will all be in action as the calendar turns to August, just know that sports - and the world for that matter - still aren’t out of the woods of this pandemic. It can all come to a halt at the drop of a hat! Hopefully the leagues continue to take precautions so as to make it a point to keep the positive momentum moving forward. Seriously, how exciting was it to see Gerrit Cole, Giancarlo Stanton and Mookie Betts all suited up and earning the hundreds of millions of dollars they signed for on Thursday night?! Fingers crossed it continues. Here’s what’s going down over the weekend.

The final day of the English Premiere League’s regular season will play out on Sunday with a whopping 10 games on the board. Liverpool might’ve already won it weeks ago, but there’s still business to tend to for a number of other teams. It’s all about relegation! That should have teams like Chelsea, Manchester United and Leicester City playing with purpose in hopes of clinching a top-4 spot. Serie A betting action will also be on the table both Saturday and Sunday with nine games set to play out through the weekend. And don’t forget about the “MLS Is Back” Tournament with four fixtures scheduled to go down.

Denny Hamlin has shown a knack for coming up big at the tail end of the month. He closed the month of June out by taking the checkered flag in the Pocono 350, and then followed it up with a win in this past Thursday’s Super Start Batteries 400. In doing so, he snapped the string of unknown underdogs coming out of nowhere and winning. NASCAR betting won’t return to the fold until Sunday, August 2 so that’s the next time Hamlin will get a shot to improve his odds of winning the 2020 NASCAR Cup Series Championship. Last we checked, he was the +600 favorite to take home the honors followed by Kyle Busch +650, Chase Elliott +800, Martin Truex Jr. +1000, Ryan Blaney +1100, Joey Logano +1100 and Brad Keselowski +1200.

Opening night for the reboot NBA betting season is less than a week away! The matchups for July 30 find the New Orleans Pelicans installed 1.5-point favorites against the Utah Jazz and the Los Angeles Lakers 2-point favorites against the Los Angeles Clippers. Then there’s six matchups locked in for the following day with the nightcap between the Houston Rockets and Dallas Mavericks (+1, 225.5) likely to reel in a ton of action. Betting lines are readily available for all of these matchups, and they’ll no doubt be on the move the closer we get to tip-off. Lock your prices in now!

Oh what a day Saturday will be for MLB bettors - Three nationally televised games with each and every team in action! The Milwaukee Brewers and Chicago Cubs kick the slate off at 1 p.m. ET on FOX. Then you got the Minnesota Twins and Chicago White Sox squaring off at 2:10 p.m. ET with Rich Hill set to square off against Dallas Keuchel. Other notable afternoon matchups include Blue Jays/Rays, Angels/A’s and Braves/Mets. FOX’s evening telecast brings it on home with James Paxton toeing the bump for the Yankees against Stephen Strasburg and the Nationals, but don’t forget about the matchup between the Diamondbacks and Padres on FS1 with Robbie Ray set to oppose his near mirror image in Dinelson Lamet. Oh baseball we’ve missed you!

Fight Island goes out with a bang in Fight Night 174 with MMA bettors getting to sink their teeth into 15 freaking matches on Saturday night from the Flash Forum on Yas Island, Abu Dhabi. The main event will pit Robert Whittaker (-127, 4.5) up against Darren Till with the end result making the middleweight division that much clearer. Nostalgia surrounds the co-main event with Mauricio Rua (-181, 1.5) taking on Antonio Rogerio Nogueira in the final bout of his 20-year career. Other matchups include Bethe Correia/Pannie Kianzad (-152, 2.5), Fabricio Werdum/Alexander Gustafsson (347, 2.5), Mike Gundy/Movsar Evloev (196, 2.5) and a bevy of others. Hey MMA bettors, It’s Tiiiiiiime!

From E-Soccer to CS:GO to DOTA 2 to League of Legends to Starcraft 2, a full lineup of E-Sports betting is all lined up for the weekend. Go ahead and make your wagers then follow all the action live on Bookmaker’s backend!

Madden NFL20, MLB The Show 20, NBA2K20, NHL20 EA Sports and UFC3 exhibition matchups are all lined up for the weekend. Each and every one of them can be wagered upon and seen live on the family of PrimeTimeAction channels over at Twitch.TV.

Each and every one of these sport sims can be watched and wagered upon live on their respective family of streams at @PrimeTimeAction on Twitch.TV.