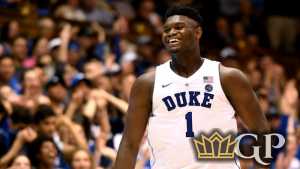 Zion Williamson has been the projected No. 1 pick in the 2019 NBA Draft since his senior year in high school. Hell, probably even before that.

Zion Williamson has been the projected No. 1 pick in the 2019 NBA Draft since his senior year in high school. Hell, probably even before that. He improved his draft stock during his only season at Duke, and even an injury scare didn’t sway NBA teams, or Williamson. The only question was who would make Williamson the top pick. That was answered last month when the New Orleans Pelicans won the Zion Lottery.

If there was any doubt that Williamson would go first overall, which there wasn’t by the way. The Pels started clearing their roster to make him the face of the franchise. Trading Anthony Davis to the Lakers not only cleared out the middle, it brought in several young pieces for the team to grow with. It also brought some nice draft picks. The Pels will take Williamson with the No. 1 selection and also get the No. 4 pick. The fun in this year’s draft takes following the selection of Williamson at No. 1, though there is a consensus among the top three.

The 2019 NBA Draft will take place on Thursday, June 20, at 7 p.m. ET from Barclays Center. Unlike other major sports, the event will take place over one day and consist of two rounds with a total of 60 player selections. ESPN will cover the festivities.

Draft odds surfaced a while ago, but with Williamson solidifying his position as the No. 1 selection most online sportsbooks have chosen to take the lines off the board. We will see odds resurface, but you can expect oddsmakers to get creative with prop bet options since there is no mystery as to who the top selection is going to be. At the odds listed above, a $100 wager on Williamson would pay just $5, which is hardly worth spending the time to make the bet.

Most mock drafts have Morant going to Memphis with the second overall pick in the draft, but this isn’t a lock. Oddsmakers like it to happen and have the Murray State standout at negative odds to be selected after Williamson. Morant’s game is perfectly suited for the NBA and many draft experts liken his game to that of Russell Westbrook in part because of his athletic ability.

Morant led the country in assists per game last season while ranking in the top-10 by scoring 24.5 points per game, proving he can do anything on the court. The competition at Murray State wasn’t the same that RJ Barrett faced at Duke, but there’s no denying Morant has the goods to excel at the next level. And Barrett elected not to work out for the Grizzlies, instead choosing only the New York Knicks and stating he wants to be a New Yorker. If there was any question as to who would be the second selection, Barrett made Memphis’ decision that much easier.

There is a consensus among the top three in the draft, and the order appears to be set. After that things get dicey, especially with the recent trade between the Lakers and Pelicans. Los Angeles moved its No. 4 pick to the Big Easy to acquire Anthony Davis and the Pels can add to their stable of young stars. Draft day trades can always throw a wrench into the best plans and that’s something most online sportsbooks offer a prop bet on. How many trades will be made on Thursday?

There are ways to make money on the NBA Draft with a number of prop bets offering a much better payout than the No. 1 pick. How many Duke players will be drafted in the first round? What is the draft position of certain players? And how many ACC players will be taken in the top-five or the first round? We know who will be taken with the No. 1 overall pick, but there are payouts for other bets on Thursday.