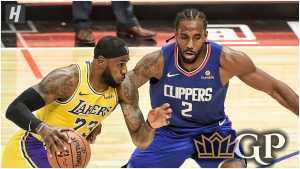 Rarely have the Los Angeles Lakers and Los Angeles Clippers been relevant NBA teams in the same season. With these clubs being a big part of all the offseason happenings, it appears as though that’s about to change.

Rarely have the Los Angeles Lakers and Los Angeles Clippers been relevant NBA teams in the same season. With these clubs being a big part of all the offseason happenings, it appears as though that’s about to change. They’ve shared the same city since 1984 and the same arena since 1999, yet they’ve never faced each other in the NBA postseason. In fact, in the last 35 years they’ve both qualified for the playoffs in the same season just six times. So, the new season begins with the LA teams favored to win it all at most online sportsbooks. If one does emerge as champion they will likely have to go through the other.

Some splashy moves by both sides jumpstarted this rivalry and raised interest in SoCal, which had been dormant for the last few years with the Lakers trying to regain their edge. Can you believe it’s been six years since the Lakers last made the playoffs? The whole building-through-the-draft thing was scrapped when LeBron James was brought on board. That didn’t work so well with the team suffering through another losing season in 2018-19.

So what the hell, why not go all in on a veteran bunch that will hopefully get the club back to the playoffs? LeBron ... I mean the Lakers ... orchestrated a blockbuster move during the offseason by finally acquiring Anthony Davis from the Pelicans. Many thought the Davis trade rumors during last season were a reason why the team sputtered after a promising start. The loss of James to injury was another factor, as was a general lack of talent and experience on the roster. Luke Walton was the scapegoat, getting the axe in favor of former Pacers head man Frank Vogel.

James and Davis pose a formidable duo and the club surrounded them with more pieces. Everything was thrown together quickly so it remains to be seen just how the team fits together early in the season. Plus, James is getting up there and the Brow has had injury issues in the past. If one or both go down at some point is there enough to keep the boat on the water?

The Lakers cleared room to pursue Kawhi Leonard as well this summer, but it was the Clippers that landed him. The Clips exceeded expectations last year by reaching the playoffs and adding Leonard and Paul George gives plenty of star power to the teams in Tinsel town. Should it be any other way? Leonard’s play last year was THE reason why the Raptors won the NBA title and the Clips pulled off a coup to get him.

The future is void of draft picks after sending a bunch to OKC for George. And getting George is what inspired Kawhi to pick Clipper Red over Forum Blue. Steve Ballmer said what the hell, we’ll worry about draft picks later because the time to break a decades-long streak of never reaching a conference final are over. The window is open with the Golden State Warriors going through a transition and the Clips were able to retain several key pieces from last season’s run. Lou Williams adds some punch off the bench and Montrezl Harrell is an underrated defender.

With all the wheeling and dealing over the summer and the LA teams adding top-tier talent, keep in mind the Clippers will be without George for the first few weeks of the regular season as he recovers from shoulder surgery. Much like new teammate Leonard and Davis down the hall, PG13 has dealt with injuries for much of his NBA career. He played and started 77 games with OKC last season averaging a career-best 28.0 points per outing to finish third in MVP voting. George missed the entire preseason so playing without him to start the year isn’t going to be a shock. Doc Rivers had time to set his lineups in advance and the Clips have a stellar supporting cast so I can’t see the absence of George being a major stumbling block this early in the year.

The early line suggests a close game and I expect that to be the case, especially for an opener with plenty of new faces on the floor. Even without George the Clips have plenty of depth and secondary scoring. They also have some of the best wing defenders in the game, which gives plenty of value to the under.

Lakers at Clippers ATS Pick: Look to the UNDER