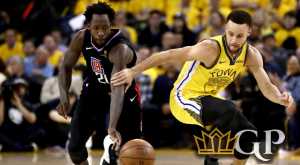 The Golden State Warriors knocked the Los Angeles Clippers out of the playoffs when these two teams last met, but they were different teams at the time. Since then, the Clippers added Kawhi Leonard and Paul George-though the latter remains injured for...

The Golden State Warriors knocked the Los Angeles Clippers out of the playoffs when these two teams last met, but they were different teams at the time. Since then, the Clippers added Kawhi Leonard and Paul George-though the latter remains injured for this game, while the Warriors lost Kevin Durant in the offseason. They did sign Klay Thompson to keep him in the fray, but like George, he won’t play in this game due to injury.

This will be the Clippers’ first regular season home game in their new arena-the Chase Center-on the opposite side of the bay. They lost their first preseason game in the arena.

Both teams will try and get their seasons off to a strong start as they meet for the second game in what is ultimately a long regular season. Can the Clippers get their first road win of the season in this one or will the hometown Warriors knock off the Clippers despite a less star-studded roster than the one that Los Angeles managed to steal a game from in Oakland in last season’s playoff series.

The Clippers ended the preseason just 2-3, but this team is much better than that and we should see the true Clippers when the games matter, including on Thursday.

Los Angeles had a surprisingly solid season last year, winning 48 games and stealing a couple from the Warriors in the playoffs despite trading away Tobias Harris at the deadline and lacking any true star. Doc Rivers did a brilliant job coaching a team of good, but not great players, and getting the most from them.

Now, however, they have a star in Kawhi Leonard who comes over from the Raptors after leading that franchise to a title. Paul George may not be ready to contribute, but Leonard and Patrick Beverly give the Clippers a stellar defensive foundation while Montrezl Harrell, Lou Williams, Landry Shamet, Ivica Zubac, and JaMychal Green give Rivers a strong rotation of players.

Williams was the team’s main scorer last year while Harrell has dominated in the preseason. Meanwhile, Shamet offers the team a sharpshooter from the outside and Zubac is a strong rebounder inside the paint.

Leonard, however, is what brings this team together. We saw him lead a band of quality players to a title in Toronto and he instantly—along with Paul George once he’s healthy—makes the Clippers a more-than viable candidate to win it all in the 2019-2020 season.

On the other side, the Warriors have take a sizeable step backwards. The former super-team is still one of the better clubs in the Western Conference with Stephen Curry leading the way, but Kevin Durant is gone, and Klay Thompson is injured and won’t be playing in this one.

Without them, Curry’s main compliment pieces on Thursday night will be Draymond Green coming off a down season and D’Angelo Russell who did score 21.1 PPG last year but may be an interesting fit on this team.

This is not the same team that’s been a perennial NBA Title contender for years. They’ve got some pieces but have slide back to the pack. A lot is riding on Green to be able to bounce back as Curry will be guarded a lot heavier than he has in the last couple seasons without Durant or Thompson on the floor.

The Warriors beat the Clippers in Game 6 to send Los Angeles home in the first round of the playoffs last year, winning that final game 129-110 in the City of Angels. While the Clippers ultimately fell in the series, they did seal two games in the series, winning Game 2 and Game 5 as they did their best to keep pace with the high-powered Warrior offense.

Golden State boasted a fast pace style of player last year, but will need to slow things down a bit more given their roster changes.

In the Game 6 win, Golden State got 50-points from Durant and 15 more from Andrew Iguodala, neither are still on the team.

Golden State will shoot to give fans a win in their first regular season home game in their new arena, but they’ll have to do so again a Kawhi Leonard led team who will be leading his team against the Warriors on their home floor after he lead the Raptors to a win in Game 6 of the NBA Finals to end the season last year.

Leonard was dominant in that game—and series—against the Warriors and should similarly dominant on the court on Thursday in what will be his second regular season game in a Clippers’ uniform. This could be a big statement win for a Clippers’ team many have picked to win it all, against a team with one of the best home court advantages in basketball that has been a conference powerhouse over the last half decade.

Look for big games from Leonard, Harrell, and Williams with Curry struggling a bit given the extra coverage as a result of the lack of support around him compared to years past.

Take the Clippers to get some payback for their postseason exit when betting at one of the leading online sportsbooks.

Clippers vs. Warriors ATS Pick: The Warriors do have home court advantage in this one, but this is a far different team than the one we saw take the court last season. Without two key players from season’s past, this team could be in for a humbling series starting on Thursday. Curry and company should at least keep it close, but take Los Angeles in a close one on Thursday night.