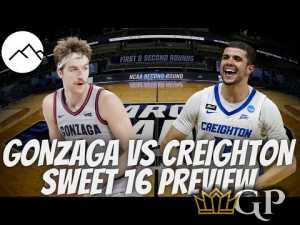 The return of March Madness has been maddening, especially for some higher ranked teams. One No. 1 seed is gone and two No. 2 seeds have been eliminated. Let's get ready for Sweet Sixteen Best Bets this weekend.

They may not be the best 16 teams remaining, but they are the last 16 standing as we reach the second weekend of the NCAA Tournament. The return of March Madness has been maddening, especially for some higher ranked teams. One No. 1 seed is gone and two No. 2 seeds have been eliminated. One quarter of the Sweet 16 is from the Pac-12 and another four teams entered the Dance as a double-digit seed. It has been exciting to say the least as college hoops fans and sports bettors rejoice in the return of the Tournament.

There are no sure things when it comes to betting, I guess that’s why it’s called gambling. The best team remaining in the Tournament is the best team in college basketball, so I guess the Gonzaga Bulldogs would have to be a strong choice of many. The Zags were favored to win the national championship at the start of the season and they only solidified their place among the best with an undefeated romp so far. They’re looking to become the first undefeated national champion in 45 years.

But is Gonzaga a good bet? The Zags will be laying points in every remaining matchup and it’s around this time that they’ve crumbled in the past. Making it to the round of 16 isn’t the issue – they’ve done that in the past five Tournaments – closing the deal is. They cruised through the first two rounds with payout wins as a 33-point favorite over Norfolk State and while laying 15.5 points to Oklahoma. Here is the Sweet 16 schedule of games with opening odds listed.

As dominant as they’ve been all season it’s hard to look past the Bulldogs. As good as they are offensively, and they’re really good, they are equally stout on the defensive end. The Zags are easily the most complete team in college basketball and they could go down as one of the best teams ever if they finish things off. Winning all 28 games this season and 32 straight dating back to last year almost sets them up for failure. If anything this club has learned from the past and won’t suffer a letdown along the way.

With four players scoring in double-figures, the Zags average nearly 93 points per game. And those four players are all deadly shooters. As a team Gonzaga makes over 55 percent of its shots! What makes them so dangerous is their depth. The starting five do most of the damage, but there is little drop off when the subs enter. They’ve won their last 25 games by at least 10 points and the closest game all season an 87-82 decision over West Virginia back in early December. They’ve beaten opponents by a whopping 23.6 points per game this season and Creighton doesn’t have the firepower to keep up.

While the Zags have been dominant as expected, no team has looked better than the USC Trojans in the first two rounds. The way they dominated Drake and Kansas makes you wonder how they lost a game this season. The Mobley brothers came to play and they are a force on the floor. USC didn’t win the Pac-12 regular season title and they fell to Colorado in the conference tournament, but they could be the best Pac-12 team still standing. It’s unfortunate one of the Pac’s teams will be ousted in the Sweet 16. USC hit the board as a 2-point favorite in this matchup and considering they easily handled the Ducks in their regular season meeting I have no problem backing Troy.

USC’s size was a factor in holding Oregon to a season-low point total in their 72-58 win on Feb. 22. The Trojans held OU to 40.4 percent shooting and owned a 39-25 edge in rebounds. Pac-12 Player of the Year Evan Mobley, who averages 16.5 points, 8.8 rebounds and 3.0 blocks, scored just only 11 points in that game. His twin tower brother Isaiah didn’t play due to injury. Having them both on the floor and getting some complementary help from Santa Clara transfer Tahj Eaddy allowed the Trojans to easily cover in the first two Tournament games while handing Kansas its worst Tournament loss ever, 85-51.