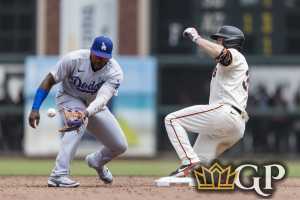 First pitch for this NL West matchup between the San Francisco Giants and Los Angeles Dodgers is set for 7:15 p.m. ET on Saturday, July 23, 2022. The game will air live on FOX from Dodger Stadium. Let's look at Saturday night baseball picks.

We witnessed a great baseball rivalry last weekend in the American League between the Red Sox and Yankees, now the senior circuit takes the stage with the best it has to offer. The rivalry between the San Francisco Giants and Los Angeles Dodgers entered new territory last season when the clubs battled down to the wire combining for 213 regular season wins with SF breaking the Dodgers’ stranglehold on the NL West. The first ever postseason meeting followed making sure their matchups in 2022 would be noteworthy. The race for the division title continues on Saturday when the clubs meet in the third of a four-game weekend set

First pitch for this NL West matchup between the San Francisco Giants and Los Angeles Dodgers is set for 7:15 p.m. ET on Saturday, July 23, 2022. The game will air live on FOX from Dodger Stadium. BookMaker.eu will have betting options for every game of the MLB season.

The Giants broke LA’s streak of eight consecutive NL West titles last season, but they’ll be hard pressed to repeat. They did close the first half of the season on a high note winning three straight over the Brewers and seven of nine improving to 48-43. Inconsistent would be a good way to describe the Giants this season since prior to their closing spurt they dropped eight of nine games including a season-high six-game skid.

Last season was a perfect storm for the Giants getting career years from most of their regulars while staying free of long-term injuries. That hasn’t been the case this year with veterans Evan Longoria, Brandon Belt and Brandon Crawford all missing chunks of time. It’s unlikely they catch the Dodgers at the top of the division but the postseason is a real possibility with the field expanded. The Giants enter the second half just a half-game out of the third wild card spot and they did sweep the Dodgers when the clubs last met, though that was in SF.

It’s been the same story for the Dodgers. All they do is win, closing the first half with four straight victories and 15 wins in 17 games for a NL best 60-30 record. The Dodgers are on pace to eclipse last season’s franchise record 106 victories. They’ve been such big favorites in most of their games that they aren’t making a lot of money despite being 30 games over .500. Their run differential of plus-169 is more than double the next closest team in the NL leaving them as a strong play on the runline. The Dodgers are 52-37 ATS putting them up nearly $1400.

Their pitching staff has been hit hard with injuries and some of their big sticks in the lineup have struggled, yet the Dodgers flash impressive depth leading the NL in ERA ad WHIP while producing the second-most runs per game and OPS with 117 homers at the break. They struggled against the Giants last month getting outscored 12-4 in a three-game sweep.

Betting a rotation after the All-Star Game takes some finagling, especially for teams that had players throw in the contest. The Giants weren’t one of those clubs with their only hurler Carlos Rodon skipping the midsummer classic. So the club has its starters set for this critical weekend series with Alex Wood (6-7, 4.20 ERA) getting the nod on Saturday. Wood will make his second start this season against his former club looking to improve on a shaky first outing. He gave up four hits and three runs over 5.1 innings in a 9-1 loss at Dodger Stadium in early May. He’s been sharp in three July starts giving up just one earned run over 16.2 innings for a 0.54 ERA. He walked one batter with 19 strikeouts over that span. It’s hard to imagine a guy with a lifetime 3.56 ERA continuing a dominant stretch.

With Clayton Kershaw and Tony Gonsolin each pitching an inning in the All-Star Game the Dodgers have yet to set their rotation. It probably won’t matter a heckuva a lot who they run out there since the entire staff has been awesome. Four of the five starters currently in the rotation have an ERA below 3.00 with Gonsolin and Tyler Anderson both posting double digit wins. Starters have combined to go 43-14 with a nifty 2.77 ERA and 1.05 WHIP. If they have a weakness it’s the bullpen. Relievers have a 3.26 ERA and 1.11 WHIP

If anything the games between these teams are intense. The Giants went 10-9 last season winning the division by a game and the Dodgers took the series 6-4 in 2020. It’s been close this year with each club winning at home. LA won the first two by a combined score of 12-2 with the Giants getting a sweep last month. The Dodgers won nearly 70 percent of their home games in the first half and have been dominant at Dodger Stadium over the years giving them an edge.

BookMaker offers play-by-play betting odds for live sporting events every day! The user-friendly wagering interface on your smartphone provides an easy way to place bets on the go. Mobile betting lines are updated by the minute, so click here to start gambling on thrilling live action at BookMaker Sportsbook!