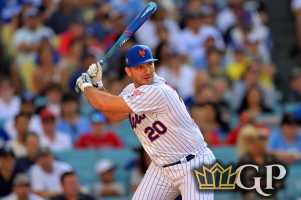 Two teams very familiar with a second half collapse get together in the first post All-Star break edition of Sunday Night Baseball looking to avoid the fate that befell them last season. The San Diego Padres and New York Mets are currently among the expanded playoff field but both are well aware that means little with plenty of baseball left to play. The Padres struggled offensively over the last month leading up to the All-Star Game but they were in top form when the clubs met earlier in the season scoring a total of 25 runs while taking two of three games.

First pitch for this NL encounter between San Diego Padres and New York Mets is set for 7:08 p.m. ET on Sunday, July 24, 2022. The game will air live on ESPN from Citi Field. BookMaker.eu will have betting options for every game of the MLB season.

The Padres were 13 games over .500 at the All-Star break last season just three games behind in the NL West. They were still within striking distance in early August at 18 games over the breakeven point then the wheels came completely off. The Pads won just 12 of their last 46 games missing the playoffs completely while falling four games under .500. They seem better equipped to avoid a similar meltdown with a seasoned manager in Bob Melvin leading the way and a strong group of starters that runs seven deep.

There have been cracks in the rotation, though, and the offense has been average at best leaving the club wondering if a repeat of last season is inevitable. They entered the All-Star break with just seven wins in 21 games and their staff, which had been among the best in MLB most of the season, dropped to 10th in ERA. Meanwhile, the offense continued to struggle while waiting for the return of Fernando Tatis Jr. During that 21-game span they were limited to two runs or less 10 times playing below the total in 54.4 percent of their games overall.

The Mets also appear better equipped to avoid a letdown. Leading the NL East at the All-Star break last year the Mets won only 29 of their final 74 games. They led at the break this season playing the entire first half without Jacob deGrom and getting just a few starts from Max Scherzer. They closed the first half taking two of three in a showdown with the Braves then won three of four against the Cubs closing their pre-break schedule at 58-35.

Other than the surprising Orioles, the Mets have been the most profitable team in the majors up over $1200 on the moneyline thanks to a staff that ranks among the best in baseball despite not having their aces. Scherzer returned a few weeks ago and deGrom is gearing up for his season debut though that was pushed back after the two-time Cy Young Award winner had some stiffness in his shoulder.

Forever etched in Padres history, Joe Musgrove (8-2, 2.42 ERA) is the top hurler on a deep rotation and one of the best in baseball. He was magnificent over his first 12 starts going 8-0 with a 1.59 ERA, 0.92 WHIP and .196 OBA leading the Cy Young discussion. Oh, and the Padres won 11 of those 12 starts. He hasn’t been nearly as dominant recently going winless in his last four outings with his two worst starts of the season included. He allowed six runs to the Phillies to start the skid and was touched for nine hits and five runs in five innings in Colorado last time out. It was his shortest start of the season. Still, Musgrove has been solid with 14 quality starts and a 0.97 WHIP over 104 innings. The Pads average 5.3 runs in his starts, a full run better than their season average, and they are 12-4.

With Scherzer expected to get the start in the series opener the Mets have options. The likely candidates are Carlos Carrasco or Chris Bassit. Carrasco leads the staff with 10 wins despite having a higher ERA and WHIP than Bassit. And Bassit has been everything the Mets expected and more since coming over from Oakland. He leads the staff in innings pitched and strikeouts while posting a 7-6 record. Bassit has pitched better at Citi Field, though his record doesn’t indicate it. He’s just 2-4 in nine home starts, but his ERA is 1.5 runs lower and he boasts a 1.04 WHIP compared to a 1.26 WHIP on the road.

The Padres have backed Musgrove with a lot of runs, which is surprising for a team that has as many problems as they do. And another reason for their success in the first half was their play on the road. If Musgrove can go at least seven innings it means he’s pitching well and his mates are scoring. That’s happened a lot this season and I expect it will continue.

BookMaker offers play-by-play betting odds for live sporting events every day! The user-friendly wagering interface on your smartphone provides an easy way to place bets on the go. Mobile betting lines are updated by the minute, so click here to start gambling on thrilling live action at BookMaker Sportsbook!