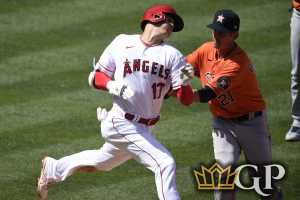 Friday night, the Houston Astros will host the Angels to get the baseball gambling weekend off to a tremendous start. Let's look at MLB Weekend Best Bets for Friday, April 23 through Sunday, April 25.

Joe Maddon's arrival as manager of the Los Angeles Angels was not the hit it was supposed to be in 2020.  But that is written off to the pandemic.  Thus far in 2021, the Angels are off to an encouraging start in what looks like a wide-open American League West.  Friday night, the Houston Astros will host the Angels to get the baseball gambling weekend off to a tremendous start.  Also on the docket are the Washington Nationals at the promising New York Mets, the Texas Rangers at the Chicago White Sox, the Cincinnati Reds at the St. Louis Cardinals, and the San Diego Padres at Los Angeles Dodgers wrapping up the weekend on ESPN Sunday Night Baseball.

The Angels got off to a 9-6 start and rank third in MLB for run production.  Naturally, Mike Trout powered the start with five home runs, a .385 average, and 1.277 OPS.  Houston stumbled to a 7-9 start with a pitching staff ranked 28th for quality starts.

Fans and gamblers that called the Nationals accidental World Series champions in 2019 continue to smile.  Washington flopped out of the gate for 2021 at 6-9. The Mets took the early lead in the National League East at 7-5.  Pitching is the strength of the Mets, as evidenced by an MLB ranking of 4th for staff earned run average and 5th for quality starts.  New York's run production is a big problem at 30th in MLB.  2019 Home Run King Pete Alonso continues to look like a flash in the pan.  Alonso was hitting .227 with two home runs to start the year.  But woeful Washington is unlikely to take advantage, especially with Marcus Stroman as the probable starter for the Mets.

Chicago remains one of the hot properties for the pajama boy media that is always impressed with high-profile offseason moves.  The White Sox split their first 18 games but had encouraging metrics of 6th for run production and 10th for staff earned run average.  The problem with the Rangers is that they aren't that good.  Texas dropped ten of their first 18 games and ranked an abysmal 29th for bullpen earned run average.  Yermin Mercedes was powering the White Sox with a .390 average, 1.090 OPS, four doubles, four home runs, and 12 runs batted in.

The Cincinnati Reds won eight of their first 15 games, powered by a lineup ranked 1st in MLB for run production and 2nd for home runs.  Pitching remains the big concern regarding the Reds.  Cincinnati ranked 27th for quality starts.  Speaking of pitching, it's always supposed to be a strength of the Cardinals.  Instead, St. Louis ranked 27th for staff earned run average and 26th for quality starts.  That wasted a lineup that ranks 5th for run production and 1st for home runs.  But in this game, the Cardinals are expected to start Jack Flaherty, who is 3-0 with a 3.80 earned run average.  Cincinnati counters with Luis Castillo, who has been shelled with a 6.05 ERA thus far.

Last year, the Padres were the Cinderella darlings of baseball.  Some grouches complained that San Diego's success was based on the pandemic condensed schedule.  These curmudgeons may have a point.  San Diego was an underwhelming 10-9 to start the 2021 campaign.  By contrast, the defending World Series champion Los Angele Dodgers were the hottest brand on the board.  Los Angeles won 14 of their first 18 games, ranking 4th for run production and 2nd for staff earned run average.  San Diego is expected to start Joe Musgrave for this one.  Musgrave threw a no hitter earlier this month, but he is all the Padres have for this one.